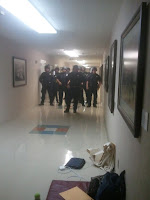 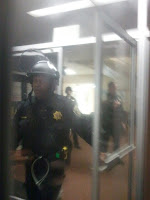 The following is a short press that was released to a local news channel about the events that occured early this morning:

This morning on the fourth day, April 16 at 3:24 A.M. we were met with the administration’s opposition expressed through a riot taskforce.

Earlier that morning at approximately 12:30 A.M CSUS police entered the building for the first time accompanied with San Francisco State police. We were told that the new forces were needed, and that our own police were showing them the layout of our building. At this time we asked to be updated about the situation and we were refused that request.

Our police liaison Yeimi Lopez, again approached CSUS police with questions and she was told that they could no longer release information, and that they were following the orders given to them.

At 3:24 AM there was a police officer at the front doors unlocking the entrance, when asked what was happening and why, we were told that he could not answer that question. At the same time police were assembling in a militant formation with full riot gear, batons, and a large amount of zip ties. They were approaching sleeping students from multiple directions within the building. They threatened with force that if we did not leave we would face arrest. Our police liaison met with Lieutenant Christine Lofthouse that if we did not leave the peaceful demonstration that we would face arrest.

When the police moved in to take action there were only about 4 students awake out of 27. The campus police felt that it was necessary to wear full riot gear, and act in a threatening manner to a completely non violent student movement.

THIS IS HOW OUR ADMINISTRATION TREATS STUDENTS

We were approched from two different directions, and they slowly advanced on us students, and continued until we were all outside, where the police preceeded to lock the doors using the zip ties that were already prepared. Then baricaded the front entrance by personally blocking it with a line of officers.

Now we are reasonable people and we understand the police did not take it upon themselves to act this way. In order to take such extreme actions they were given this command from the administration.

We ask that as others read this keep in mind that although we were threatened with force and we ‘voluntarily’ left as a group we still consider this action a SUCCESS. The type of action we take and the type of change we are demanding will take time. This is not a 100 meter dash, this is a marathon. This is only the beginning, we are committed and we will see this through. To put it in the words a fellow activist said “even though we walked away from our sit in, we have not walked away from our movement”.

Please know that we hear your support loud and clear and that it is so energizing to our group to know that we have such widespread support. I dont think our administrations are preapared for us, and everything we are capable of.

Lets keep on keeping on folks!
Students for Quality Education (SQE)
Posted by Paul B at 11:06:00 AM