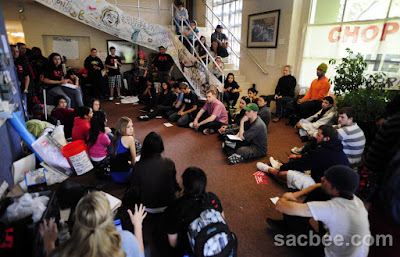 A group of Sacramento State students who have been holding a sit-in at a campus administration building will hold a press conference at 4 p.m. today to discuss how long they plan to stay.

A few dozen students remained inside the lobby of Sacramento Hall, or just outside, Friday afternoon, two days after they began their sit-in on Wednesday.

Campus officials have allowed the students to sleep in the lobby for two nights but said today they are growing concerned about conditions in the building. A toilet has broken from being used so much and students have been bringing food into the lobby during their stay, said campus spokeswoman Kim Nava.

"By having so many people in the lobby for a sustained period, we're getting into health issues, air quality issues and liability," Nava said. "Now our concerns are for the students and the staff who work here."

The students have issued a list of demands, including a moratorium on raises for managers at the university and for a promise from campus President Alexander Gonzalez to support an Assembly bill that calls for a fee on oil and gas extraction to support higher education. The university has provided a response to those demands on its web site at http://www.csus.edu/sacstatenews/Articles/student-demonstration041511.html

Students first presented their demands during a Wednesday protest that was part of a larger effort at all 23 California State University campuses to draw attention to budget cuts and rising tuition.

The demonstrations are also a reflection of the bitter state of negotiations between the CSU management and the California Faculty Association, the union that represents professors. The parties are bargaining for a new contract. A union newsletter described Wednesday's events as the "first major action of the campaign to win a fair contract."