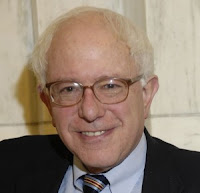 The following is a news release from the office of Sen. Bernie Sanders (Vermont-I)

With Congress returning to Capitol Hill on Monday to debate steep spending cuts, Sen. Bernie Sanders (I-Vt.) said the wealthiest Americans and most profitable corporations must do their share to help bring down our record-breaking deficit.

Sanders renewed his call for shared sacrifice after it was reported that General Electric and other major corporations paid no U.S. taxes after posting huge profits. Sanders said it is grossly unfair for congressional Republicans to propose major cuts to Head Start, Pell Grants, the Social Security Administration, nutrition grants for pregnant low-income women and the Environmental Protection Agency while ignoring the reality that some of the most profitable corporations pay nothing or almost nothing in federal income taxes.

Sanders compiled a list of some of some of the 10 worst corporate income tax avoiders:

1) Exxon Mobil made $19 billion in profits in 2009. Exxon not only paid no federal income taxes, it actually received a $156 million rebate from the IRS, according to its SEC filings.

2) Bank of America received a $1.9 billion tax refund from the IRS last year, although it made $4.4 billion in profits and received a bailout from the Federal Reserve and the Treasury Department of nearly $1 trillion.


3) Over the past five years, while General Electric made $26 billion in profits in the United States, it received a $4.1 billion refund from the IRS.

5) Boeing, which received a $30 billion contract from the Pentagon to build 179 airborne tankers, got a $124 million refund from the IRS last year.

6) Valero Energy, the 25th largest company in America with $68 billion in sales last year received a $157 million tax refund check from the IRS and, over the past three years, it received a $134 million tax break from the oil and gas manufacturing tax deduction.

7) Goldman Sachs in 2008 only paid 1.1 percent of its income in taxes even though it earned a profit of $2.3 billion and received an almost $800 billion from the Federal Reserve and U.S. Treasury Department.

8) Citigroup last year made more than $4 billion in profits but paid no federal income taxes. It received a $2.5 trillion bailout from the Federal Reserve and U.S. Treasury.

9) ConocoPhillips, the fifth largest oil company in the United States, made $16 billion in profits from 2007 through 2009, but received $451 million in tax breaks through the oil and gas manufacturing deduction.

10) Over the past five years, Carnival Cruise Lines made more than $11 billion in profits, but its federal income tax rate during those years was just 1.1 percent.

Sanders has called for closing corporate tax loopholes and eliminating tax breaks for oil and gas companies. He also introduced legislation to impose a 5.4 percent surtax on millionaires that would yield up to $50 billion a year. The senator has said that spending cuts must be paired with new revenue so the federal budget is not balanced solely on the backs of working families.

"We have a deficit problem. It has to be addressed," Sanders said, "but it cannot be addressed on the backs of the sick, the elderly, the poor, young people, the most vulnerable in this country. The wealthiest people and the largest corporations in this country have got to contribute. We've got to talk about shared sacrifice."