Bill Fletcher, Jr., "How Do We Bring Obama Home?" 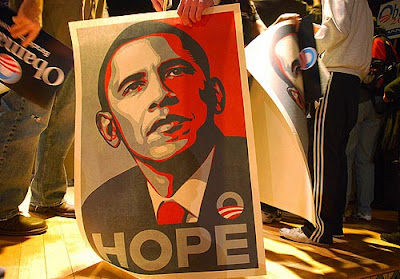 How to Respond to Obama

Rather than dwell on the question of whether we can bring Obama home, whether he ever was home, etc., I want to refocus on this question of how to respond to him, particularly as we start to think about 2012.

First, what do we now say about 2008? Contrary to those who have thrown up their hands and feel betrayed by what the Obama administration has not done, I start in a different place. I continue to assert that Obama was knowable in 2008. He was a charismatic, smart candidate who made the right call on the Iraq War and stepped out on the issue when it was necessary. He was also, as I said at the time, someone who could appear to be different things to different people. The problem was that too many of his supporters saw what they wanted to see rather than what existed.

What existed? Well, from the beginning he was a corporate candidate. We knew that. The question was not whether he was one but the extent to which his views could be shifted in order to take progressive, non-corporate stands. Second, he was a candidate who was going to avoid race as you or I would avoid a plague ship. He went out of his way to prove that he was not an ‘angry black man’ and that race was not going to be an issue that he would harp on. Third, he was clear that he wanted to change the image of the USA around the world, but it was not clear to what extent he wanted to change the substance of the relationship of the USA to the rest of the world.

Raising these and other issues in 2008 was exceedingly difficult. Raising concerns regarding Obama and his views in 2008, even when one offered critical support to the campaign (as did I), was often met with accusations of throwing a wet towel on a fire, and other such metaphors. Of course, there were those who denounced Obama all the way, but they offered very little as an alternative, with the exception of what we must frankly characterize as symbolic political action. What these fierce critics failed to address was how to account for and speak with the masses of people from various social movements who were gravitating toward Obama’s campaign, individuals and groups looking to create something very different in the USA (and around the world). In fact, it was because of these masses of people, incorrectly described as a “movement” by some but certainly an energized base, and the potential of that base to become a transformative force, that it was correct to critically support the Obama campaign, despite the limitations of the campaign and the candidate.

What did we learn? We learned immediately that it was a mistake to give any elected official, but particularly someone reflecting more ‘center’ politics, a honeymoon. Virtually every social movement and organization stepped back in the interest of providing Obama space. It did not work. There was space, alright, but the political Right seized it.

We also should have learned that it is not about the ‘man’ but it is about the administration. We, African Americans, tend to focus too much on Obama-the-man. We like his speeches. He is smart and seems to have a great family. He sounds so sincere. He understands and appreciates our culture. That is all well and good, but Obama-the-man is not as important as Obama-the-administration. This became all too clear during the Honduras coup in 2009. A democratically elected government was overthrown in a coup. Obama initially condemned this but then did nothing to unseat the ‘coup people’ (a term made famous by President George H.W. Bush in 1991, describing those who overthrew President Gorbachov in the then Soviet Union). Not only that, his administration took steps to keep the democratically elected president out of office and came up with a so-called compromise that resulted in the forces of the wealthy elite returning to power. In that sense, it does not matter whether we like Obama as a person; it is a matter of what we say about the policies of his administration.

Of course, we had a more recent example of this when no one from the administration could quite explain why the return of Haitian President Aristide from South Africa was being opposed by the US government. Does Obama like or hate Aristide? It does not matter; what matters are the actions of the Obama administration.

What should we do? First, we have to focus on policies rather than intent. Those who uncritically supported Obama in 2008 should not feel ashamed but neither should they now flip into despair or abstentionism. We have to keep in mind that this administration, as all administrations, is affected by pressure. This administration SEEMS to be more affected by pressure from the political Right than pressure from progressives and those on the Left but that is largely because the left and progressives have failed to offer sustained pressure on the administration. At each moment that many left and progressives stand up to the administration, they are more often than not met with bared teeth and a growl, which then results in silence on our part. The political Right understands that pressure is not about barking. It is about biting.

1. Forget running a candidate against Obama in 2012. That would be a sure way to alienate much of his black and Latin base. Instead, there needs to be a progressive strategy focused on Congressional races. That means identifying key races to run genuine progressive candidates against conservative Democrats and/or Republicans.

2. We need to build an electoral organization that can run such candidates. There are examples of these around the country but we need to expand, ultimately building something at the national level that rivals the vision of the National Rainbow Coalition from the late 1980s. It needs to be an organization that has a mass base and can run candidates inside and outside the Democratic Party.

3. We desperately need mass action. Wisconsin was wonderful for many reasons but one important one was the sustained presence in the capitol. A protest movement focused on power needs to be prepared to break the law, not through the actions of a few individuals, but much as happened in Wisconsin, as well as in the Civil Rights movement, with masses of people making a situation untenable. But we have to also develop key strategic targets for our actions where we are clear on what we want them to do. This will largely happen at the local level at first, but it can also happen at the national level, such as through selective boycotts.

4. We have to think and act globally and locally. We must link with social movements around the world challenging US foreign policy, providing such movements with whatever level of support we can. We cannot allow more Honduras coup situations, and we have to make it clear that US policy in Afghanistan is a disaster.

None of these “to dos” had Obama’s name on them. That is because we are not simply confronting or attempting to influence an individual. We are up against an empire and the spokesperson for that empire happens to be someone in whom many people placed excessive hope. The hope should have rested with the millions who supported him and were seeking a better day. Those are the people upon whom we need to focus so that we can go beyond the Obama moment and move in a progressive direction.

[BlackCommentator.com Editorial Board member, Bill Fletcher, Jr., is a Senior Scholar with the Institute for Policy Studies, the immediate past president ofTransAfrica Forum and co-author of Solidarity Divided: The Crisis in Organized Labor and a New Path toward Social Justice(University of California Press), which examines the crisis of organized labor in the USA. ]
Posted by Paul B at 3:57:00 PM