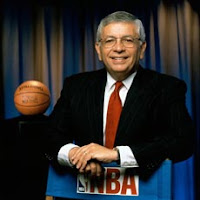 by NBA Commissioner David Stern
Special to The Bee, May 15, 2011

The recent decision by the Kings to remain in Sacramento for at least one more season – but hopefully much longer – represents a turn of events for which many thank-yous are required: to Mayor Kevin Johnson, who refused to accept the inevitability of the Kings' departure and rallied regional leaders and state and federal government representatives – including U.S. Rep. Doris Matsui and state Sen. Darrell Steinberg; to the greater Sacramento business community; to longtime Kings supporters and new Kings supporters; and, most important, to Kings fans.

The outpouring of community support was a phenomenon unlike any that I have seen in my almost three decades as NBA commissioner. It has spurred me to send my colleagues to Sacramento to help the team respond to the enormous demand for sponsorships and tickets, and assist them with the permanent hiring required to replace employees who left because of the franchise's uncertain status.


The Maloof family was overwhelmed by the community's display of dedication and loyalty for the Kings and has committed its support to the proposed plan to construct a new entertainment and sports complex in downtown Sacramento. I know that turning that plan into a reality within the one-year timetable we face will not be easy, but I am encouraged that the necessary pieces are falling into place for that to happen, powered by the emerging sense that this is a project that combines city-center development, jobs for the region, an entertainment center that would enable Sacramento to compete with other top-tier cities for all events, and the cultural and emotional values attached to a major league sports team that is a source of local pride.

I think it is fair to consider the costs to the community of the construction of an entertainment and sports center, especially at a time of high unemployment, mortgage foreclosures and financial pressures on municipal governments. That decision will ultimately be made by the people of Sacramento. But I also strongly believe that potentially significant job creation and economic development opportunities, as well as quality-of-life factors, support the construction of a new entertainment and sports complex.

The NBA has experienced the success public-private partnerships can have in developing facilities that contribute to the economic transformation of neighborhoods. Los Angeles, Dallas and Washington, D.C., are excellent examples. The possibility of building a facility integrated with an intermodal transportation hub, the economic benefit to local businesses – restaurants, hotels, car rental companies and all tourism-related industries – from the activity of NCAA games, conventions, concerts and family shows that such a center generates, the retention of taxes on tickets sold and, yes, a substantial contribution from the owners of the Kings through a long-term lease agreement and its guaranteed payments, give me confidence that it can be done.

To that end, I have assured Mayor Johnson, Rep. Matsui, Sen. Steinberg and regional leaders that the NBA will continue to support the efforts to make the Kings a self-sufficient franchise in Sacramento and to assure that they are playing in a state-of-the-art arena made possible by a public-private partnership that will be a continuing source of pride for the greater Sacramento region.

But let me say it one more time: Thank you, Sacramento!

© Copyright The Sacramento Bee. All rights reserved.
Posted by Paul B at 2:56:00 PM