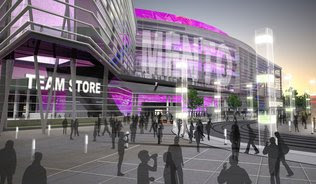 With Kings owners Joe and Gavin Maloof and dozens of fans in attendance at City Hall, the Sacramento City Council is getting its first look at the detailed plans behind an arena proposed for the downtown railyard.
Those plans call for an arena somewhere in the mid-range of NBA facilities - not as large as some of the mega-arenas built in recent years, but much bigger than the Kings' current home, Power Balance Pavilion.

The plan does not present a funding mechanism for the project, whose cost is estimated at $387 million. Both the public and private sectors would have to make "significant contributions" to the development, the report states.


The funding plan will be determined once it is known how much the Kings - and possibly a third-party arena operator - would be willing to contribute.

An analysis has determined a new arena would generate enough revenue from basketball, concerts and other events to pay the estimated ongoing debt on the $387 million price tag.

Downtown developer David Taylor and national arena builder ICON Venue Group of Denver have proposed a facility that would seat 18,594 for basketball games. That's nearly 1,300 more seats than Power Balance Pavilion. It would stand on city-owned property near 5th and H streets in the railyard.

The entire facility would contain 675,000 square feet of space, making it roughly one and a half times the size of Power Balance Pavilion.

The plan also calls for 74 luxury suites - more than double the number at the current arena - an indication the development team believes there is adequate corporate support in the region to purchase those suites.

Other significant upgrades from the current site include tripling the number of loading docks - seen as essential elements to attract high-profile entertainment acts - a high-resolution HD LED scoreboard, and increasing the number of lounges, team stores and concourses.

There are many details left to be finalized, including who would operate the facility. Taylor and ICON said it is clear a public entity should own the arena, with the Kings serving as the anchor tenant.

Kings ownership has said in recent days they would be willing to act as tenants in an arena. They currently operate Power Balance Pavilion.

If a public entity does not operate the facility, that part of the equation could be left to a third-party operator. That is the arrangement at many of the arenas built recently, including those in Cleveland, Orlando, Kansas City and San Antonio.

Read more: http://blogs.sacbee.com/city-beat/2011/05/sacramentos-arena-plan-reviewed-by-city-council-public.html#ixzz1O3r8iK6H
Posted by Paul B at 2:17:00 PM