Desmond Tutu: Young South Africans Don't Know What Mandela Did for Us 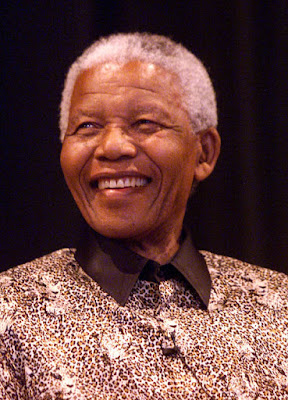 Desmond Tutu: Young South Africans Don't Know What Mandela Did for Us
Elisabeth Braw, Senior Reporter, Metro International
Huff Post World, 7/18/11
Most people can name two South Africans: Nelson Mandela and Desmond Tutu. Today, July 18, Mandela turns 93. Because the political prisoner-turned-president is very frail, he'll celebrate his birthday surrounded only by his family. But three years ago, friends like Tutu created Mandela Day, an invitation for people to spend 67 minutes -- one minute for every year Mandela fought to end apartheid -- doing something good for society.
But exactly what is a good thing? Is South Africa a good society today? I spoke with Tutu, the former Archbishop of Cape Town, who like Mandela won a Nobel Prize for his role in bringing an end to apartheid. Earlier this year, Tutu retired from interviews and public events; this interview was an exception to honor Mandela.
Apartheid, the system both you and Nelson Mandela fought so hard against, ended two decades ago. Have your goals been accomplished?
The most important goal has been accomplished. Blacks constitute the majority of people in this country, but under apartheid we were treated like dirt. We had no political rights whatsoever. Today we're free!
How will you spend your 67 minutes on Mandela Day?
I'll be receiving an honorary doctorate in Britain, so I'll probably tell a couple of funny stories to make them happier.
Mandela wants Mandela Day to be about younger people taking on the leadership role that people like you and he have had. Why aren't there any obvious successors?
You can ask that in almost every country. Think of Roosevelt in the United States and Churchill in Britain: there are certain people who stand out. But especially in countries where the circumstances have to change, you do need people of Mandela's stature. But those leaders don't always accomplish the changes they want. Just look at the Dalai Lama: he's incredibly popular but hasn't managed to achieve the goals he set for himself.

We were very fortunate that a combination of other events helped us: the fall of the Berlin Wall, the end of the Cold War and the fact that Mr. De Klerk [President F.W. de Klerk] decided to negotiate with the ANC. These events made the circumstances favorable for us, and helped us accomplish our goals.
Half of young Russians don't even know who your fellow Nobel Peace Prize winner Andrej Sakharov was. Could it be that oppression can, in a perverse way, be good, because it forces people to focus on values rather than consumerism?
Yes, and a good leader has to be able to inspire people living under oppression. Human beings are very strange creatures! Many young black people don't know very much about the oppression we had here in South Africa -- and it only ended 20 years ago! They don't know what Madiba [Mandela] did for our country. Maybe it's a good thing that they don't mull over things that are too awful to think about. But I worry that because they don't know the past, they'll forget the price that was paid for our freedom. Then they may not value their freedom.
South Africans have freedom and equality, but crime is rampant. What's your explanation?
We've forgotten how damaged we've been by oppression and injustice. People think that apartheid was just a political yoke, but it got into the psyches of both the oppressors and the oppressed. We've not yet found the remedy where we help people recover their sense of self-worth. When I went to Nigeria for the first time in the 1970s. I got on a plane in Lagos. Both pilots were black, something I'd never come across in South Africa. I grew inches in my excitement! We took off, but then we hit turbulence. The first thought that occurred to me was, "oh dear, there's no white person in the cockpit! Will these black guys be able to get us through this?" The awfulness of racial oppression is so bad that it can make a child of God doubt that they're a child of God. And you project your self-hatred on others who look like you. We need to recover our sense of self-worth.
When we had the Truth and Reconciliation Commission [which Tutu chaired] we heard from perpetrators. They'd tell us how they shot people, and sometimes they burnt the corpses. Burning a corpse takes seven hours, so they told us they had a barbeque while waiting. What has happened to the human race when they can burn two kinds of flesh? So, there's no question that a long period oppression has damaged all of us, both black and white. We've not yet fully recovered our humanity.
You're a clergyman, and unlike Mandela advocated non-violence in South Africa. But in Libya, for example, the West is using violence to protect civilians. Is that justified?
This is a perennial problem. The Church speaks about the Just War theory, which tries to establish when it's justifiable for a Christian to go use violence. The condition is usually that you've exhausted all non-violent means and you're certain that the conditions after the conditions after the war will be better. In the case of Libya, people tried to use non-violent means, like demonstrations. Gaddafi's response was quite awful. It's creepy that a leader could bomb his own people. Civilians have a special place in wars: you don't target civilians. Targeting them is a crime against humanity.
But once a war begins, the lines get very blurry. It's a very untidy situation in Libya. South Africa's president has been trying to persuade Colonel Gaddafi that it would be better for everybody if he stepped down. It's going to be a very messy process, but we have to do everything we can to minimize damage to civilians.
Mandela is turning 93. What will happen to South Africa when he's no longer there to hold it together?
He has progressively withdrawn. The last thing he did was open the World Cup last year, though he did appear at the local elections this year. It's becoming increasingly clear that there will have to be a life after Madiba. People are preparing themselves, but it will devastating. That's why some of us have been saying, "let's prepare ourselves for the inevitable". He has given so much of himself and has been fantastic as an icon of reconciliation and forgiveness. The best memorial to him is for us to become the kind of people he gave his life for: a free, caring and compassionate South Africa, and a South Africa that belongs to all who live in it.
Posted by Paul B at 11:56:00 AM