Why is the Most Wasteful Government Agency Not Part of the Deficit Discussion?

Published on Tuesday, July 12, 2011 by On the Commons
Why is the Most Wasteful Government Agency Not Part of the Deficit Discussion? Republicans ignore incompetence, bloat and corruption at the Pentagon
by David Morris

In all the talk about the federal deficit, why is the single largest culprit left out of the conversation? Why is the one part of government that best epitomizes everything conservatives say they hate about government—- waste, incompetence, and corruption—all but exempt from conservative criticism? 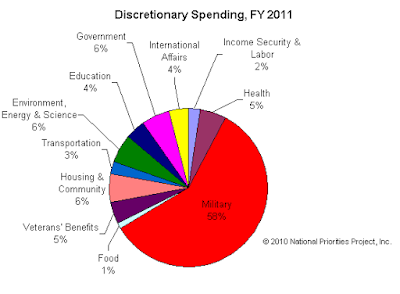 In the last decade military spending has soared from $300 billion to $700 billion. 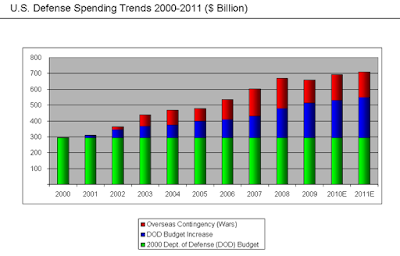 When debt ceilings and deficits seem to be the only two items on Washington’s agenda, it is both revealing and tragic that both parties give a free pass to military spending. Representative Paul Ryan’s much discussed Tea Party budget accepted Obama’s proposal for a pathetic $78 billion reduction in military spending over 5 years, a recommendation that would only modestly slow the rate of growth of military spending.


Indeed, the Republican government battering ram appears to have stopped at the Pentagon door. This was evident early on. As soon as they took over the House of Representatives, Republicans changed the rules so that military spending does not have to be offset by reduced spending somewhere else, unlike any other kind of government spending. It is the only activity of government they believe does not have to be paid for. Which brings to mind a bit of wisdom from one of their heroes, Adam Smith. “Were the expense of war to be defrayed always by revenue raised within the year … wars would in general be more speedily concluded, and less wantonly undertaken.”

The Tea Party revolution has only strengthened the Republican Party’s resolve that the Pentagon’s budget is untouchable. An analysis by the Heritage Foundation of Republican votes on defense spending found that Tea Party freshmen were even more likely than their Republican elders to vote against cutting any part of the military budget.

What makes the hypocrisy even more revealing is that the Pentagon turns out to be the poster child for government waste and incompetence.

In 2009 the Government Accountability Office (GAO) found “staggering” cost overruns of almost $300 billion in nearly 70 percent of the Pentagon’s 96 major weapons. What’s more, the programs were running, on average, 21 months behind schedule. And when they were completed, they provided less than they promised.

The Defense Logistics Agency had no use for parts worth more than half of the $13.7 billion in equipment stacked up in DOD warehouses in 2006 to 2008.

And these are only the tips of the military’s misspending iceberg. We really don’t know how much the Pentagon wastes because, believe it or not, there hasn’t been a complete audit of the Pentagon in more than 15 years.

In 1994, the Government Management Reform Act required the Inspector General of each federal agency to audit and publish the financial statements of their agency. The Department of Defense was the only agency that has been unable to comply. In fiscal 1998 the Department of Defense used $1.7 trillion of undocumentable adjustments to balance the books. In 2002 the situation was even worse. CBS News reported that Secretary of Defense Donald Rumsfeld admitted, “we cannot track $2.3 trillion in transactions.”

Imagine that a school district were to reveal that it didn’t know where it spent its money. Now imagine the Republican response. Perhaps, “Off with their desktops!”

How did Congress’ respond to DOD’s delinquency? It gave it absolution and allowed it to opt out of its legal requirement. But as a sop to outraged public opinion Congress required DOD to set a date when it would have its book sufficiently in order to be audited. Which the Pentagon dutiful did, and missed every one of the target dates. The latest is 2017 and DOD has already announced it will be unable to meet that deadline.

Adding insult to injury, last September, the GAO found that the new computer systems intended to improve the Pentagon’s financial oversight are themselves nearly 100 percent or $7 billion over budget and as much as 12 years behind schedule!

The Pentagon is not just incompetent. It is corrupt. In November 2009 the Pentagon’s Defense Contract Audit Agency (DCAA), the federal watchdog responsible for auditing oversight of military contractors, raised the question of criminal wrongdoing when it found that the audits that did occur were riddled with serious breaches of auditor independence. One Pentagon auditor admitted he did not perform detailed tests because, “The contractor would not appreciate it.”

Why would the Pentagon allow its contractors to get away with fraud? To answer that question we need to understand the incestuous relationship between the Pentagon and its contractors that has been going on for years, and is getting worse. From 2004 to 2008, 80 percent of retiring three and four star officers went to work as consultants or defense industry executives. Thirty-four out of 39 three- and four-star generals and admirals who retired in 2007 are now working in defense industry roles — nearly 90 percent.

Generals are recruited for private sector jobs well before they retire. Once employed by the military contractor the general maintains a Pentagon advisory role.

“In almost any other realm it would seem a clear conflict of interest. But this is the Pentagon where…such apparent conflicts are a routine fact of life”, an in-depth investigation by the Boston Globe concluded.

U.S. military spending now exceeds the spending of all other countries combined. Knowledge military experts argue that we can cut at least $1 trillion from the Pentagon budget without changing its currently expressed mission. But a growing number believe that the mission itself is suspect. Economic competitors like India and China certainly approve of our willingness to undermine our economic competitiveness by diverting trillions of dollars into war and weapons production. Some argue that all this spending has made us more secure but all the evidence points in the opposite direction. Certainly our $2 trillion and counting military adventures in the Middle East and Afghanistan and Pakistan have won us few friends and multiplied our enemies.

“Countries feel threatened when rivals ramp up their defenses; this was true in the Cold War, and now it may happen with China. It’s how arms races are born. We spend more, inspiring competitors to do the same — thus inflating defense budgets without making anyone safer. For example, Gates observed in May that no other country has a single ship comparable to our 11 aircraft carriers. Based on the perceived threat that this fleet poses, the Chinese are pursuing an anti-ship ballistic missile program. U.S. military officials have decried this “carrier-killer’‘ effort, and in response we are diversifying our capabilities to strike China, including a new long-range bomber program, and modernizing our carrier fleet at a cost of about $10 billion per ship.”

For tens of millions of Americans real security comes not from fighting wars on foreign soil but from not having to worry losing their house or their job or their medical care. As Joshua Holland, columnist for Alternet points out 46 states faced combined budget shortfalls this year of $130 billion, leading them to fire tens of thousands of workers and cut off assistance to millions of families. Just the supplemental requests for fighting in Iraq and Afghanistan this year were $170 billion.

What is perhaps most astonishing of all is that cutting the military budget is wildly popular. Even back in 1995, when military spending was only a fraction of its present size, a poll by the Program on International Policy Attitudes reported that 42 percent of the US public feeling that defense spending is too high and a majority of Americans were convinced that defense spending “has weakened the US economy and given some allies an economic edge.”

This work is licensed under a Creative Commons License

David Morris is Vice President of the Institute for Local Self-Reliance, based in Minneapolis and Washington, D.C., which focuses on local economic and social development.
Posted by Paul B at 11:51:00 AM