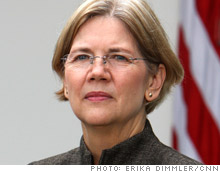 Now that Obama has passed over Elizabeth Warren for the post of heading the consumer protection bureau she created, national and Massachusetts Dems are really hoping she will run for Senate against Scott Brown in Massachusetts.

The DSCC is not commenting on whether its operatives are actively trying to recruit Warren for the race. But there are three clear reasons national and Massachusetts Dems want her to do it, according to a national Democratic operative involved in plotting 2012 strategy and a Massachusetts Dem familiar with the party’s thinking.

(1) Dems think Warren is well suited to draw a very clear contrast with Brown on the economy and Wall Street. Warren, of course, is the force behind the centerpiece of Wall Street reform, the Consumer Financial Protection Bureau. While Brown did ultimately vote for the Wall Street reform bill, he only did so after successfully watering down key reforms in the legislation that were opposed by the banking industry. Brown did this while simultaneously taking in big bucks from Wall Street firms — a concurrence that would figure heavily in a Warren-Brown matchup.

“There’s such a clear contrast on issues relating to the economy, and more specifically, Wall Street and consumer protection issues,” the top national strategist tells me, previewing attacks to come. “He has a record of doing the personal bidding of Wall Street lobbyists.”


The GOP counterargument: Despite her consumer protection work, Warren’s bio ensures that she would have trouble winning back the blue collar Dems from places like South Boston who enabled Brown’s victory. “Hard to see how a Harvard professor, originally from Oklahoma, takes those voters away from Brown,” a GOP operative says.

But Dems argue that the circumstances of the 2012 contest would be vastly different from the special election that Brown won against Martha Coakley. Statewide turnout could be at least one million voters higher because of the presidential race, and many of them could be more reliable Obama voters. And Brown would now have a record to defend and a GOPer at the top of the ticket. “He’s now got a record of voting with Republicans in Washington 90 percent of the time,” a Massachusetts Democrat familiar with the party’s thinking says. “And Brown will be more and more identified with the GOP presidential candidate.”

(2) Dems think Warren could rapidly wipe out Brown’s financial advantage. Warren’s work on consumer protection and her aggressive stance towards big banks has turned her into a populist champion of sorts among national liberals at a time when they are hungry for a more confrontational approach from Dem leaders. That, plus the fact that this would be a rematch for Ted Kennedy’s seat, would ensure that huge sums of national liberal cash would flow into the contest. “She immediately eliminates the financial discrepancy,” the national strategist says.

(3) Warren has experience facing withering GOP attacks. Dems really like the fact that as the architect of the consumer protection bureau, Warren has already proven herself capable of fending off the most aggressive and determined of GOP assaults. Warren’s bureau was a high profile target of the right for months and months, giving her invaluable experience in rebutting GOP arguments in Capitol Hill hearings and in the media.

“She’s proven herself able to address the most complex economic and financial issues in a common sense way and connect them to people’s every day lives — and she has done it in the face of very well funded attacks from the right,” the national operative says. “No one in the country has had to take that kind of fire, and no one has done it so successfully.”
Posted by Paul B at 11:09:00 AM

Speaking as someone from Massachusetts I think this is something National Democrats want more than local MA Democratic party officials. Now that may be because much of the MA democratic party is beholden to same local corporate interests as Brown is however, without full support from the likes of Boston mayor Tom Menino and Gov. Deval Patrick I think this campaign will be a very uphill climb.