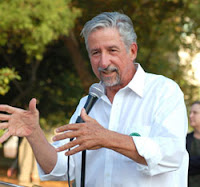 Tom Hayden | August 9, 2011
Drew Westen’s brilliant—and strategically placed—essay “What Happened to Obama? [1]” which appeared in the New York Times on Sunday, leaves out an all-important factor in discussing the president’s disappointing centrism: race.

When I asked Westen about this omission, he replied in an e-mail today that it was “mostly space” that caused him to ignore a “great question.” Westen, a white professor at Emory University, helped Obama with the renowned speech on race he delivered as candidate in Philadelphia in 2008. Westen is the author of The Political Brain, an extremely influential text on how emotions color voter thinking and behavior.

In my own thinking and writing, race always has been the primary prism through which to understand Obama. He became the first African-American president, with 95 percent of the African-American vote and support from the vast majority of people of color, young voters and white liberals. But he did so by claiming that America was entering a “post-racial” era as well as a post-partisan one. This theme carried enormous appeal and proved critical to his victory—but it was never completely true. And it prevented Obama from fully identifying with the civil rights movement’s spirit and legacy. In becoming a centrist, Obama forfeited the ability to identify in a full-throated way with the progressive liberalism that contributed to making his presidency possible. The tragedy is that the only way Obama could become the first black president was by distancing himself from race (in the same way, I would argue, that Hillary Clinton was under pressure to adapt to supposedly white male standards by heartily drinking shots of liquor and projecting her hawkishness).


Westen disagrees, but only partly. He writes “I’m not convinced by the ‘I don’t want to be the angry black man argument.’ I think this conflict aversion runs much deeper. He’s not afraid of looking angry at the left because he knows that they won’t fight back.” But Westen also ultimately agreed on the salience of race: “I think what the Philadelphia speech showed is just what every study cited in my book and every electoral study I’ve done since has shown, which you may be alluding to, namely that by not talking about race, we get into a lot more trouble than by acknowledging the elephant in the room, on a host of issues.”

To take a current example of the elephant in the room, Obama’s judicial appointments are more diverse than any other president. Nearly half his ninety-seven confirmed nominees, according to the New York Times, are women, compared to 23 percent under Bush and 29 percent under Clinton; 21 percent are African American compared to 7 percent under Bush and 16 percent under Clinton; 11 percent are Latino, compared 9 percent under Bush and 7 percent under Clinton; and 7 percent are Asian American, compared to only 1 percent under both Bush and Clinton. Obama has appointed two women to the US Supreme Court, including the first Latina, and the first openly gay man to the federal bench in the Southern New York district. But the Obama administration rarely advertises that his record on these issues is more progressive than any previous president. His advocates commonly stress the competence of the nominees while avoiding rhetoric that might sound like the president favors affirmative action quotas. But the Republican and conservative opposition fiercely stresses its coded racial objections. The director of Committee for Justice, the conservative legal lobby on judicial appointments, Curt Levey, says that “other races, to some degree, are getting stiffed” and judicial standards are being lowered. As a result of GOP Senate opposition, only ninety-sevcen of Obama’s nominees have been confirmed, a pace well behind that of Bush or Clinton.

Obama’s most vociferous opponents have been able to launch outrageous racially charged attacks with little worry that they will be called racist, because that would violate the “post-racial” spirit of the times. About half the Republican Party (and many Democrats) claim he’s an African intruder who wasn’t even born here, the original Illegal Alien. A Washington pundit commented that it was strange for him to vacation in Hawaii instead of the Hamptons. When Obama said the Cambridge police “acted stupidly” for arresting a Harvard African-American professor in his own home, a national uproar ensued. Dinesh D’Souza claimed Obama’s roots were in African and socialist anti-colonialism, a charge repeated by Newt Gingrich. Michelle Obama became a Black Panther in the minds of many.

Most of the media and many Democrats were tongue-tied in response either because they accepted the “post-racial” model, or were too timid to call these charges by their right name, which was racist. When the NAACP issued a statement accusing the Tea Party of harboring racists, there was a torrent of outrage from the virtually all-white organization. When the Department of Homeland Security’s 2009 report predicting an increase in right-wing violence precisely because of the election of an African-American president coupled with economic recession met with ferocious right-wing criticism, Secretary Janet Napolitano meekly withdrew the report. How many spoke out in defense of the report’s conclusions?

I believe the existence of deep racist currents in America explain much of Obama’s caution—and his success. This is the source of his political centrism and what Westen describes as his “risk-aversion.” We are at a demographic tipping-point in our inevitable evolution into a multi-racial, multicultural, multi-lingual society. If Obama survives eight years in office, he will preside over much of this troubled transition. Ironically, he will be the magnet of hatred for his opposition while being derided as too moderate by his support base. The parallels may be with Abraham Lincoln.

I once thought that racism was a declining vestige of an old order in a new America—that was in 1961, when I was a Freedom Rider and journalist in places like Georgia and Mississippi. Today I am no longer sure. I wish that Drew Westen had not ignored these questions for “space reasons.” I find it impossible to discuss “what happened to Obama” without their inclusion.