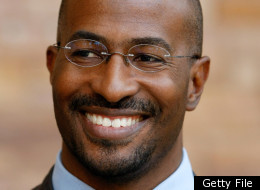 WASHINGTON -- In the wake of the deal to raise the nation's debt ceiling, widely viewed as yet another setback for the progressive community, advocacy groups on the left are redoubling efforts to change the political narrative.

S&P's decision to downgrade the United States' debt and the market selloff that followed has only emboldened those voices who believe the main structural problem plaguing the economy has less to do with debt and more to do with a lack of economic growth.

On Monday afternoon, MoveOn.org and Rebuild the Dream announced a campaign to build up a popular movement that could match (if not surpass) the debt reduction crowd in both size and energy. And they have borrowed a concept from former House Speaker Newt Gingrich (R-Ga.) as their organizing principle.

The campaign, led by Van Jones, President of Rebuild the Dream; Justin Ruben, Executive Director of MoveOn.org; and Rep. Jan Schakowsky (D-Ill.), among others, is debuting a new Contract for the American Dream. They describe it as "a progressive economic vision crafted by 125,000 Americans … to get the economy back on track." Its debut will involve a nationwide day of action, as well as an ad in The New York Times to run sometime this week, organizers said.

The basic premise of the campaign is that America isn't broke, it's merely imbalanced. In order to stabilize the economy, politicians should make substantial investments in infrastructure, energy, education and the social safety net, tax the rich, end the wars, and create a wider revenue base through job creation.

"Many of our best workers are sitting idle, while the work of rebuilding America goes undone," reads one bullet point of the Contract. "Together, we must rebuild our country, reinvest in our people and jump-start the industries of the future. Millions of jobless Americans would love the opportunity to become working, tax-paying members of their communities again. We have a jobs crisis, not a deficit crisis."

The name of the campaign is, of course, a reference to the Contract for America that Gingrich authored in the run up to the 1994 congressional elections. In the context of the current debate in Washington, the principles it promotes resemble a liberal pipe dream more than an actual outline for potential legislation. President Obama and Democratic leaders in Congress have, after all, been openly willing to throw entitlement reforms into the debt reduction discussion. And the notion that this Congress will decide to make future stimulus-like investments ignores Republicans' complete dismissal of such measures.

And yet, if you look at the specific suggestions, there is overlap between what the Contract advocates and what the president has endorsed -- mainly on the transportation and clean energy fronts. More than that, the Contract fills the obvious need for liberal advocacy groups to build a popular movement in support for their ideological side of the debt debate, something that has been clearly and at times painfully missing as a counterpoint to Washington's current obsession with austerity.

Email ThisBlogThis!Share to TwitterShare to FacebookShare to Pinterest
Labels: contract for the american dream, rebuild the dream sacramento, Van Jones