This Is What Democracy Looks Like: A Wisconsin Recall Primer 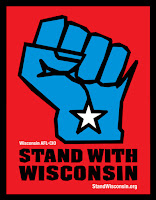 The Wisconsin recall elections that will take place Tuesday provide one of the most remarkable accountability moments in modern American history. After Wisconsin Governor Scott Walker and his Republican allies used their control of the executive and legislative branches of state government to attack labor rights, local democracy, public education and basic services, mass demonstrations erupted across the state—culminating in an early-March protest outside the state Capitol that drew 150,000 people [1] to one of the largest pro-labor demonstrations in American history.

Despite the protests, despite polls that showed broad opposition to the governor’s agenda, Walker's legislative allies continued to advance their wrecking-crew agenda.

So the Wisconsin movement dusted off an old accountability tool developed during the era of Populist and Progressive reform in the late nineteenth and early twentieth centuries: the recall. [2] Wisconsin is one of nineteen American states that allow citizens to collect signatures on petitions and force sitting official to face a special election.

In Wisconsin, six of the Republican state senators who voted with Walker will face recall elections on Tuesday. While the labor and community forces that organized the recall drives had little trouble collecting the tens of thousands of signatures needed to force the election, they faced unprecedented obstacles in getting to this point.


Terrified by the threat to his authority, Walker and his allies tried to thwart the recall drive with procedural, legal and electoral challenges—going so far as to file “fake” Democratic challengers, [3] all of whom lost to real Democrats in July 12 primaries. Walker allies also launched recall drives against a half-dozen Democratic senators, on the theory that defeating Democrats might allow them to offset losses by Republicans. (Only three of the Republican petition drives attracted sufficient support to force recalls of Democrats; one of the targeted Democrats has already been re-elected, while two others face tests August 16.)

With the approach of Tuesday’s election, Walker’s allies in national movements to privatize public schools, undermine unions and create a pay-to-play politics that favors corporate interests over those of citizens and communities have pumped millions of dollars into local elections with an eye toward defeating the Democratic challenges.

So what is the state of play?

Here is an FAQ that answers key questions:

What is the point of the recalls?

Democrats have no real ability to check and balance Walker at this point. If they win a total of three seats in the state Senate, they will shift control of the chamber and loosen the governor’s iron grip on state government—a grip that extends to the judicial branch, where Walker’s allies have used their narrow control of the state’s seven-member Supreme Court to support legally-dubious gubernatorial and legislative moves.

The best way to understand the numbers is this: nine recall elections (six targeting Republicans, three targeting Democrats) are being held this summer. If Democrats win a combination of give of those elections, they get control of the Senate. One Democrat (Dave Hansen of Green Bay [4]) won his July 12 election outright. At least three Democrats must win Tuesday to shift Senate control. Then the two Democratic incumbents facing recall votes on August 16 must win.

Yes. Two Democratic challengers are generally seen as leading in the polls. State Representative Jennifer Shilling [5], D-LaCrosse, is considered to be well ahead in her challenge to Republican Senator Dan Kapanke in western Wisconsin’s 32nd district. Former Oshkosh Vice Mayor Jess King [6] has held a narrower but steady lead over Republican Senator Randy Hopper, who has been dogged by personal scandals, in eastern Wisconsin’s 18th district.

If Pasch or Clark win, the Democrats will get to three and. If they both win, which is possible, that’s relatively comfortable control of the Senate.

In two other races, Democrats are competitive—trailing narrowly in most polls but easily within the margin of error. Former Brown County Executive Nancy Nusbaum [9], a former Republican, has been seen in recent weeks as closing rapidly on Republican Senator Rob Cowles in the Green Bay area’s 2nd district, while Shelly Moore [10], a teacher who has inspired passionate support in northwest Wisconsin’s 10th district, has shocked political veterans by making a real race of her challenge to Republican Senator Sheila Harsdorf.

If either Nusbaum or Moore win, the Democrats will have control of the Senate, no matter what happens in the August 16 recall elections of the two Democratic senators.

Is it possible that Democrats could take control of the State Senate this Tuesday and lose it the following Tuesday?

The Senate is currently split 19-14, with Republicans in the majority. If three or more Democrats win this Tuesday, control of the Senate will shift from the Republicans to the Democrats.

For instance, three wins this Tuesday would give Democrats a 17-16 majority.

Four wins this Tuesday would give Democrats an 18-15 majority.

In either of those cases, it is possible that the Democrats could lose the Senate on August 16, as voters could defeat one or both of Democrats who are facing recalls.

Is it likely that either of the Democrats who face recall votes will lose?

One of the Democrats, Senator Bob Wirch [11] of Kenosha, looks to be in a very strong position. Kenosha, the main community in historically Democratic District 22, has always been a strong union town. Rallies for Wirch have been huge and enthusiastic. The Republican candidate, Jonathan Steitz, is a corporate lawyer from Chicago who was nominated in a very low-turnout GOP primary. He is not a likely winner against Wirch, who is well-known and personally popular.

In northern Wisconsin’s 12th district, the race between Democratic Senator Jim Holperin [12] and Republican challenger Kim Simac, a Tea Party favorite who has been talked up by Glenn Beck, is likely to be closer. But Holperin, who survived a recall two decades ago, has worked the district hard and seems to be in a reasonably strong position.

If Republicans are down one seat after Tuesday’s voting, they will focus hard on Holperin and the battle for rural northern Wisconsin’s 12th district will shape up as the final slugfest of the recall season.

What if Democrats only win two seats Tuesday? Does that mean Walker maintains absolute power?

Not necessarily. If Democrats pick up two Republican seats Tuesday and hold the two Democratic seats that are up for election on August 16, the split in the state Senate will be 17-16 in favor of the Republicans. But one Republican senator, Dale Schultz [13], a western Wisconsin moderate, broke with his party on the labor issues and has in recent weeks been distancing himself from the governor. Schultz has been touring the state with a moderate Democratic senator, Tim Cullen of Janesville, and the two made a big deal about looking for places where they can work together on issues. Additionally, Schultz has spoken out publicly in recent days about how he felt that the governor and Republican legislative leaders thwarted his efforts to find a compromise with the unions during the dispute over the budget repair bill.

If Democrats finish the recall process with two more seats, they will not have clear control of the Senate, but they will put Dale Schultz in an exceptionally powerful position where—should he side with the Democrats, as he did on the collective bargaining legislation—the moderate Republican could tip the balance away from the governor.

So what's a victory?

Remember that any seat that flips from Republican to Democrat is a significant win, since all of the targeted Republican senators won election in the 2008 presidential election—surviving the Obama landslide. The Republicans are incumbents with long track records, they generally represent districts that were drawn to elect Republicans. So displacing any of them is a big deal.

However, the clear goal of the recall effort has been to shift control of the Senate. Winning three or more seats will do that; winning two seats only creates the possibility if Schultz chooses to try and find the middle ground—probably in conjunction with Cullen.

If the democrats do take control of the state Senate, what does that mean from a policy standpoint?

Most of the contentious issues of the past six months—the stripping of collective bargaining rights, the radical redistricting of the state, the passage of a draconian Voter ID law—have inspired court challenges. Any of these issues could be sent back to the legislature by the courts. If so, a Democratic Senate (or a Republican Senate with Schultz in a position to empower the Democrats) could force Walker and his Republican allies to negotiate—and ultimately to moderate extreme positions. And if new budget issues arise, as is possible, the Democrats would be positioned to demand better funding of public education, local services and Medicare-based health programs.

If Democrats take control of the Senate, the victory will have long-range political impacts. Efforts to recall Governor Walker, which can begin in November, will be certain to proceed. Additionally, labor and community groups in other states—such as Ohio and Michigan—will be emboldened as they pursue referendum and recall strategies to push back against right-wing hegemony. And it is not unreasonable to suggest that President Obama and national Democrats will take note of the popular appeal of a pushback against Republican extremism, especially in the battleground states of the upper Midwest and Great Lakes regions.