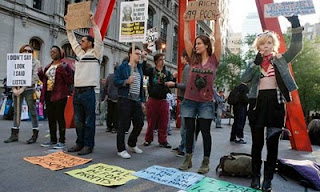 Inspired by Tahrir Square, those who gathered in lower Manhattan are keen to mount a more permanent protest at corporate influence in US politics
http://www.guardian.co.uk/world/2011/sep/19/wall-street-protesters-angry

Photographs by Robert Stolarik for The New York Times
An officer reaching for a man who was later arrested at
the protests in the financial district Monday morning.
See a slide show of arrest sequence below.
Posted by Duane Campbell at 2:02:00 PM

lets do a occupy wall street protest here..in sacto..and back it up

I am with you Ihave been living in India the past 15 yrs.


would come back to Sac for this...

would love to wake thy naber =)