The Economic Crisis- Presentation on Saturday

The Economic Crisis- What is it Costing Your Students? Presentation (with slides) on the continuing economic crisis, the looting of the economy, causes, effects, and alternatives.
Presented  as a part of the  annual conference of The Bilingual Multicultural Education Department (BMED)  Sat . Nov. 5, 2011.  11;30  Am. In the University Union, at  Sacramento State. The Mountain Room.  Free. Open to the Public. 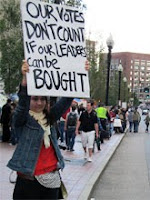 While the Great Recession officially  ended in 2009,  a CNN/Opinion Research  poll, shows that   over 74 % of U.S. citizens  believe the economy continues in recession. ( Sept.26, 2011)  The unemployed and the under employed face the toughest job market in decades.
“ It’s now impossible to deny the obvious, which is that we are not now and have never been on the road to recovery. “ Paul Krugman.  NY. Times.


With some 25 million people unemployed or under employed, the U.S.  is  on the edge  of a new era of social protest where everyday people demand to break Wall Street’s hold on our political leaders  and our lives.
DSA, the principal U.S. affiliate of the Socialist International, is the largest socialist political organization in the country with more than  6000 members and active locals in more 40 U.S. cities and campuses. DSA Locals in New York, Boston, Philadelphia, Chicago, and Wichita, among others, have taken an active role in the Occupy Wall Street, Occupy Freedom Plaza, and other Occupy protests in support of jobs and economic justice.
Sacramento DSA: https://sites.google.com/site/sacramentodsa/
Dr. Campbell is a professor emeritus of Bilingual Education at CSU-Sacramento.

For more information on the conference , please contact Dr. Maggie Beddow, Conference Chair at beddow@csus.edu   or the College of Education BMED office: (916) 278-5942.
Posted by Duane Campbell at 8:39:00 PM