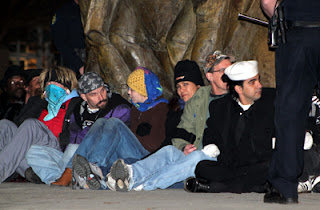 21 of the 23 were booked into Sacramento County Jail and all were released by 2:30 p.m.

The Sacramento Police also cited and released two people without taking them to be booked in the County Jail. The two cited included a man in a wheelchair and a disabled military veteran, according to Cres Vellucci of Occupy Sacramento, one of the 23 people arrested.

Activists claimed they encountered some police brutality during the arrests. "Police did not use pepper spray to break-up the protest, but used very brutal 'pain' holds on some of those arrested," said Vellucci. "Those actions are being investigated. The local ACLU office has been contacted."

One Occupy Sacramento supporter, Joe, occupied a tree in the park, but came down of his own accord, citing concern for his health. He was taken from the scene in an ambulance.

Vellucci said a total of 110 people have arrested at the Park since October 6. There are nine trials on the misdemeanor charge scheduled to start Dec. 13.

District Attorney Jan Scully refused to prosecute, but the City of Sacramento is pursuing the cases, which carry six-month jail sentences for a curfew violation.

"Occupy Sacramento maintains the First Amendment does not end at 11 p.m. (midnight on weekends), and that free speech and freedom of assembly rights continue for 24 hours a day, despite a local ordinance banning First Amendment activities in city parks at night," said Vellucci. "There is a federal civil rights suit pending."

The crackdown on the First Amendment by the cities of Sacramento, Oakland, Los Angeles, San Francisco and others across the country is apparently part of a nationally coordinated campaign by the Department of Homeland Security and other federal law enforcement agencies in collaboration with local police departments, as exposed by author Naomi Wolf in her November 25 article in the UK Guardian (http://www.guardian.co.uk/commentisfree/cifamerica/2011/nov/25/shocking-truth-about-crackdown-occupy).

"So, when you connect the dots, properly understood, what happened this week is the first battle in a civil war; a civil war in which, for now, only one side is choosing violence," wrote Wolf. "It is a battle in which members of Congress, with the collusion of the American president, sent violent, organised suppression against the people they are supposed to represent. Occupy has touched the third rail: personal congressional profits streams. Even though they are, as yet, unaware of what the implications of their movement are, those threatened by the stirrings of their dreams of reform are not."

On Saturday, December 10 at noon, Occupy Sacramento will be honoring the Universal Declaration of Human Rights Day at Cesar Chavez Park, 10 and I streets, Sacramento.

The Declaration, adopted by the United Nations on December 10, 1948 provides for the civil and human rights of every person, including assuring that everyone has the right to

• freedom of peaceful assembly and association
• work and a standard of living adequate for health and well-being
• food, clothing, housing, medical care and education.

Anti-war activist Cindy Sheehan, founding member of the Gold Star Families for Peace, will speak at 1 p.m. Her son, Casey, was killed in the U.S. war in Iraq.

Her talk will be followed at 2 p.m. with a march to the County Jail (651 I Street) to demand humane treatment of prisoners.

Music and spoken word poetry will be featured from 3 to 4 p.m., followed by the Occupy Sacramento General Assembly.

Finally, there will be a march to Second Saturday in midtown at 6:30 p.m.