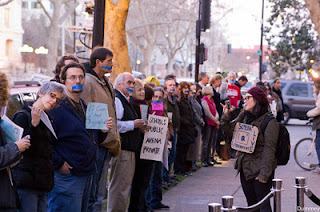 “Silent” protestors with their mouths taped shut  confronted Sacramento Mayor Kevin Johnson and corporate education proponent Michelle Rhee as they entered a  carefully promoted and controlled  discussion about education issues at the Tsakopoulos Library Galleria, 828 I St, in Sacramento on Wednesday, January 25.
Demonstrators held a news briefing with local media outlets.  The Sacramento Bee did not cover the demonstration.  This protests occurs as Wall Street corporations and foundations are funding not only the privatization of education.  The protestors set up a ‘gauntlet” of protestors with their mouths taped shut –something Rhee admitted to doing to her noisy students when she was a teacher. She later said some of the students were hurt when they removed the tape.
The “Town Hall” organized by Rhee and Johnson gained positive press coverage on local news channels.  They covered Rhee’s views and the advocacy group without describing her connections to right wing groups.


Why do many reporters not report on the realities of the corporate sponsorship of  one group of  “school reformers”?  They too often  rely upon the wisdom of selected “spokespersons” such as Michelle Rhee.  The media  has  been sold a framework of  a corporate view of accountability. Corporate sponsored networks and think tanks such as the the Thomas B. Fordham Institute, the Broad Foundation,  the Bradley Foundation, the Pacific Research Institute,  and the Olin Foundation provide “experts” prepared to give an opinion on short notice to meet a reporters deadline.  Most reporters assume that these notables are telling the truth when in fact they are promoting a particular  viewpoint. Who do they not talk with?  They fail to interview experienced teachers and professionals who have worked for decades to improve the quality of inner city schools.
There were teachers in the protest that could have been interviewed.  “Rhee, disgraced former-chancellor of the Washington D.C. public schools and wife of Johnson, is the standard-bearer of corporate privateers, raising millions of dollars through her organization, StudentsFirst, from the likes of the Koch Bros and Rupert Murdoch to advance an agenda of union-busting, school vouchers and public school give-aways to private interests,” according to Kate Lenox, an organizer for the protest.
“The national headquarters of StudentsFirst happens to be located right here in Sacramento and will soon formally open its offices downtown on K Street above the Rite Aid store,” Lenox explained.
The Sacramento Coalition to Save Public Education, along with Occupy and Sacramento teachers participated  in the protest.  Teacher Lori  Jablonski explained,   “Diane Ravitch’s important  visit to Sacramento on Friday, Jan. 20,  left the 3000 people in attendance with a clear message of what those of us who care deeply about public education must do to stand up to and reject the privatization of our schools and the treatment of our children as commodities whose value is measured by “bubble tests.”   Michelle Rhee,  is the standard-bearer of the privateers. “
See the post below on Selling Out our Schools on corporate funding of the pro charter anti teacher efforts of leading legislative advocates including ALEC.  “Selling Schools Out” , by Lee Fang. http://www.theinvestigativefund.org/investigations/corporateaccountability/1580/
For more information, contact Kate Lenox, 916-201-0225, or Cres Vellucci, 916-996-9170.  Report assembled with contributions from writer Dan Bacher.