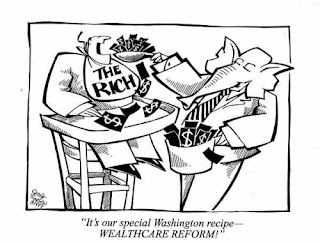 Join Us on March 5 Day of Action
To Demand that the California Government:

Fully fund public education, which is a public good and is the cornerstone of a democratic society, a vibrant economy, and the social and intellectual development of every individual.

Fully fund social services, which to a large part provide a crucial safety net for the most vulnerable members of society and therefore serve as a measure of society's moral standard.
Cartoon used with permission.
Tax the rich, pass the Millionaires Tax, pass the Oil Tax to Fund Education, and reject regressive taxes.

In the state of California working people with the lowest income pay a higher rate (11%) of state and local taxes than the rich (8%). This tax inequity has contributed to an 81 percent growth in the income of the wealthiest 1 percent of Californians between 1978 and 2008, while during the same period the income of the poorest 20 percent dropped by 11.5 percent.

We refuse to pay for the crisis created by the 1 percent. If we make the rich and the corporations pay, we can fully fund public education and social services and reverse the budget cuts, tuition hikes, and attacks on jobs. Join us in this peaceful demonstration.

Endorse our rally and mobilize your members to attend.