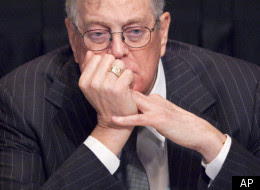 David Koch, executive vice president of Koch Industries, attends a meeting of the Economic Club of New York, Monday, April 11, 2011. (AP)
WASHINGTON -- At a private three-day retreat in California last weekend, conservative billionaires Charles and David Koch and about 250 to 300 other individuals pledged approximately $100 million to defeat President Obama in the 2012 elections.
A source who was in the room when the pledges were made told The Huffington Post that, specifically, Charles Koch pledged $40 million and David pledged $20 million.
The semi-annual, invitation-only meeting attracts wealthy donors, Republican politicians and conservative activists. Last year, hundreds of activists gathered outside the walled-off resort to protest the meeting. This year, however, the conference went off quietly.
"Conference organizers and their guests successfully slipped in and out of the Coachella Valley without being detected, by buying out nearly all of the 500-plus rooms at the Renaissance Esmeralda resort in Indian Wells," reported The Desert Sun. "The resort closed its restaurants, locked down the grounds with private security guards and sent many workers home."
This is the ninth straight year the Kochs have hosted the conference. As Politicoreported last year, the meetings often adjourn "after soliciting pledges of support from the donors -- sometimes totaling as much as $50 million -- to nonprofit groups favored by the Kochs."


The fact that the wealthy conservative donors pledged $100 million for the 2012 elections shows how intent they are on trying to get Obama out of office -- and previews how intense, and likely nasty, the general election will be.
There are limits on how much an individual can give to a political candidate. Therefore, much of the money pledged at the recent gathering will likely go to super PACs or nonprofits that can spend and accept unlimited amounts of funds. GOP primary voters have already gotten a glimpse of how the political system looks with super PACs around: record amounts of money spent on a large number of negative ads in the early primary states.
The source told The Huffington Post that they lamented the direction the conference has taken over the years. They said it used to be about "conservative strategy" and building a movement, but now it was mostly an "alpha male" spectacle focused on fundraising to beat Obama.
The Koch brothers have been the major donors behind many Republican candidates, the Tea Party movementand efforts to discredit the science around man-made global warming. Democrats frequently highlight the brothers to fundraise, and the first TV ad of the Obama reelection campaign invoked them as "secretive oil billionaires attacking President Obama with ads fact checkers say are not tethered to the facts."
Also at the conference was Ken Griffin, founder and CEO of the Citadel Investment Group. He supported Obama in 2008, leading his employees to contribute more than $205,000 to the campaign. By the time of the election, however, he had switched his allegiance to Sen. John McCain (R-Ariz.). Since the election, he has openly discussed his "frustration" with Obama's policies, stating that he is "greatly concerned about the fiscal instability of the U.S." In the fourth quarter of 2011, Citadel employees completely abandoned Obama, contributing nothing to his campaign while giving $120,500 to presidential candidate Mitt Romney.
The Center for Public Integrity also reported that for the first time, Las Vegas casino billionaire Sheldon Adelson attended the conference. Adelson and his family are largely bankrolling Newt Gingrich's presidential run, with Adelson and his wife, Miriam, having given the pro-Gingrich super PAC Winning Our Future $10 millionjust this year.
Koch Industries did not return a request for comment.