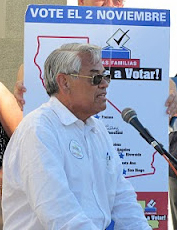 The AFL-CIO and the SEIU are applauding President Obama's decision to give work permits to young, law-abiding undocumented immigrants who came to the U.S. as children, rather than deporting them.
"President Obama showed leadership and courage," according to SEIU Secretary Treasurer Eliseo Medina, on a "common sense move [that] is fiscally responsible and widely supported."
"President Obama is showing great courage in taking this action, and it presents a stark contrast with the GOP’s presumptive presidential nominee who has vowed to stop the DREAM Act if elected. In Congress, polarizing
partisan politics kept the DREAM Act from becoming law in 2010.
"Through President Obama’s courageous leadership, DREAM eligible students can get relief from the immediate threat of deportation. The president has now done all he can do, but the kind of relief he is able to grant is temporary. It is now up to Congress to pass the DREAM Act and comprehensive immigration reform, which is the only way that the dreams of these productive Americans can be realized."
[note; Eliseo Medina shown above is an Honorary Chair of DSA]
"We are thrilled," AFL-CIO President Richard Trumka said in a statement.
The President’s actions bring much-needed security and encouragement to our nation's youth who can finally live without fear of separation from their families and deportation to a country they barely remember. [...] The AFL-CIO commends the Administration for its courage and leadership in taking an important step towards a more just America.


President Obama’s announcement is a critical step that begins to address our nation’s dire need for comprehensive immigration reform. We call on both parties to work with the President towards a legislative solution that will address the parents and families of these immigrant youth, and the millions of undocumented workers who are now living in the shadows.
From. The Labor tab of Daily Kos.
© Kos Media, LLC
Site content may be used for any purpose without explicit permission unless otherwise specified