As shoppers scurried around Union Square
yesterday, a picket that drew more than 300 people
could be heard for blocks. The grand-scale noise-
making was in front of the Grand Hyatt, where
workers and supporters demonstrated against what
they say is unsafe and unfair treatment of hotel
workers.

UNITE HERE Local 2 has been supporting a boycott
of a couple Hyatt locations in San Francisco for
years now. But this week the national union, along
with a broad coalition of supporters, has called for a
worldwide boycott of the hotel chain.
Posted by Duane Campbell at 6:00:00 PM No comments:

The roots of Bain Capital in El Salvador’s civil war

The roots of Bain Capital in El Salvador’s civil war- Romney got the money from the Death Squad leaders.

And, http://rt.com/programs/big-picture/romney-bain-death-squads/
Posted by Duane Campbell at 3:37:00 PM No comments:

"You're So Bain" FINAL

Everyday Heroes- No on Prop.32

Romney Will Bring Far Right to Power At All Levels of His Administration
Posted by Duane Campbell at 8:34:00 PM No comments:

The Truth About the Deficit: Part 1- Sen. Bernie Sanders

Capitol Public Radio this morning calls Prop 30 as " Governor Jerry Brown's tax initiative this fall." The name of the initiative is "Schools and Local Public Safety Act."  It  would prevent  $ 4.8  billion cuts from our schools. and 1.3 billion in further cuts to colleges and universities.
KCRA news uses a similar bias based description.  You can contact the station to request  a non biased description in the news.
Note; this blog is not neutral.  The above news organizations claim to be neutral.

Robert Reich: Why Taxes Have to Be Raised on the Rich


The Rich Really Are Different

by Paul Waldman
In the last couple of years, we've occasionally seen stories where Wall Street types justify their enormous compensation packages by saying they work really, really hard. They stay late, they work weekends, they just keep their noses to the grindstone, and that's why they get paid what they do. Sure, $30 million a year is a lot of money. But the hedge fund manager who made it probably worked 1,000 times harder than the electrician who made $30,000. Right?
I thought of those Wall Streeters and their rhetoric about hard work when considering the question of Mitt Romney's tax returns. One of the things we've found out in the whole when-did-Romney-leave-Bain controversy is that even after he retired/went on a leave of absence, he was being paid at least $100,000 a year for doing what he swears was absolutely nothing. That's a lot of money for doing nothing, at least to people like you and me, but remember that to Mitt Romney, it's peanuts. According to the information he has released, he made over $42 million in 2010 and 2011 without doing any actual work. He hasn't held a job in five and a half years, since he left the Massachusetts governor's office. Tens of millions of dollars just keep pouring into his many bank accounts, without him lifting a finger. And of course, he pays a far lower tax rate on all that income than people who work for a living.

Romney conveniently ignored the sentences immediately before and after Obama’s quote, which made clear the president’s line referred to building public infrastructure like roads, bridges and the Internet that businesses utilize to their benefit. But Romney didn’t stop there: As he tried to twist the knife on Obama, he essentially made the president’s argument for him.
After exhorting business owners to stand up and be recognized, Romney said:
I know that you recognize a lot of people help you in a business. Perhaps the banks, the investors. There’s no question your mom and dad, your school teachers, the people that provide roads, the fire, the police. A lot of people help. But let me ask you this, did you build your business? If you did, raise your hand. Take that, Mr. President.

Here’s how Obama described the relationship between “the people that provide roads, the fire, the police” and business owners in that speech Romney cited:
Somebody invested in roads and bridges. If you’ve got a business, you didn’t build that. Somebody else made that happen. The Internet didn’t get invented on its own. Government research created the Internet so that all the companies could make money off the Internet.
The point is, is that when we succeed, we succeed because of our individual initiative, but also because we do things together. There are some things, just like fighting fires, we don’t do on our own. I mean, imagine if everybody had their own fire service. That would be a hard way to organize fighting fires.

Why is Mitt Romney Hiding the Rest of His Tax Returns?

The War On Workers Comes to California, in Disguise | California Progress Report

The War On Workers Comes to California, in Disguise | California Progress Report
Posted by Duane Campbell at 10:18:00 AM No comments:

The Aftermath of Occupy Will Surpass the Gains of 1960s Activism

(Photo: Glenn Halog / Flickr)
Tuesday, 03 July 2012By Bill Zimmerman, Truthout | Op-Ed
A tsunami of citizen activism, initiated by Occupy Wall Street, is poised to wash over American society. The coming battle to correct the grotesquely unequal distribution of wealth and power in this country is likely to have an even more profound impact on our society than what occurred in the 1960s.

Fifty years ago, a few white students like me were outraged to find that the sugarcoated view of America we had been taught in the 50s did not match reality. The notions of justice and human rights we had internalized motivated our actions, and as idealists, we opposed the Jim Crow laws in the South and the needless killing in Southeast Asia.

Young activists taking to the streets today harbor no illusions about justice in America. They are cynical, worldly wise and unemployed; many are weighed down by debt. They know they have few prospects for meaningful or even gainful employment. They protest in their own economic self-interest. They are a wholly different phenomenon than the 1960s activists.

In 1958, when I entered the elite University of Chicago, annual tuition was $870. Inflation would make that $6,945 today. But tuition at the U of C this year is $43,851, more than six times as much, making crushing debt inevitable for most students.

Students in my day could drop out for a time, leave their career track to take an offbeat job, become an activist, explore other countries or simply have fun. The multitude of available jobs meant that we were free to drop back in whenever we chose. Not so today.

The United States graduates about 800,000 college students annually. With an economy no longer expanding as it did previously, only about 400,000 can find full-time jobs. For the same reason, there is insufficient employment for millions of working-class Americans led to expect a middle-class lifestyle, but sinking into poverty instead.
Read more »
Posted by Paul B at 10:26:00 AM No comments:

Not What It Seems : Special Exemptions Act

Women and Latinos decisively reject the party, but that isn’t the worst of Republicans’ problems.
BY THEO ANDERSON

In a speech to a group of Republicans last summer, Karl Rove called Colorado “ground zero” in the 2012 presidential election and said that “as goes Colorado, so goes the nation.”
If Rove was right about Colorado, Mitt Romney is in deep trouble. A poll taken last month showed President Obama with a seven-point lead in the state. That was down from a 13-point lead in April, primarily because Mitt Romney had gained some traction among unaffiliated voters. But Obama led among Latinos by 27 points. Among women, he led by 14 points.
The GOP’s problems among those two voting blocs are well known. Republicans have performed poorly among women for some time. John Kerry beat George W. Bush by seven points among female voters in the 2004 election, and Obama had a 13-point advantage among women in 2008. The firestorm during the GOP primary season over reproductive rights did nothing to help the Republican brand, and if the preferences of Colorado voters are any indication, another double-digit victory for Obama among women is likely.
The GOP is in even bigger trouble among Latinos. A recent USA Today/Gallup poll showed that they favor Obama by a devastating 41 points (66 percent versus 25 percent), and there is little chance that the numbers will improve much for Romney. Trapped by a base that settles for nothing less than militantly anti-immigrant policies and rhetoric, he’s left with little to offer Latinos.
Read more »
Posted by Paul B at 4:26:00 PM No comments:

The American People Are Angry

A Crystal Ball to the Post-Special Exemptions Act Future in California
Posted by Duane Campbell at 9:31:00 PM No comments:

Dark Money: Inside the Final Frontier of Unlimited Political Spending (Part 2)
Posted by Duane Campbell at 8:14:00 PM No comments: 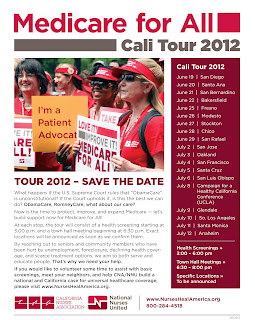 Medicare for all.
Posted by Duane Campbell at 2:44:00 PM No comments: