This election is about Democracy 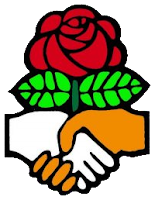 The November election is about voting to defend Democracy

Monday, August 20, 2012.
DSAmediacontact@gmail.com
In a statement [see below] issued by its national political committee, the Democratic Socialists of America calls upon the nation and DSA members to defend democracy by participating in the critical 2012 elections. The statement says, “The Left confronts a Republican Party thoroughly controlled by right-wing forces that are determined to cement a long-term control of the federal government and a majority of the states.”  The statement notes that after the 2010 Congressional elections, “A newly established Republican political control over several Midwestern states turned into a sweeping assault on public sector unions and on the social safety net.”
The statement says “A major weapon of the Radical Right is an unprecedented flood of money from super-wealthy individuals and corporations into the political arena, buying influence and votes on a massive scale.”
Joe Schwartz, chair of DSA’s national political committee, criticizes the Democratic Party for its past tepid response to the Right Wing resurgence saying, “when the country cried out for a vigorous defense against the ravages created by Wall Street greed, Obama’s economic advisors (largely drawn from Wall Street) extended the Bush administration’s bailout of the banks and financial elite without extracting a return in restored, strict financial regulation.”
The statement calls upon DSA members to work with labor unions, campus groups, the NAACP and others to “work against all forms of voter suppression. “ They note, “The first task of a movement to defend democracy is to work for maximum voter turnout in the 2012 election.”


Noting that the Left proved too weak to force the first Obama administration to respond to popular needs, the statement recognizes that labor organizations, along with minority, feminist, and lesbian, gay, bisexual, transgendered groups — as well as many DSA members — will work hard to re-elect President Obama, largely because a Romney administration would cause havoc to the lives of the majority of Americans.  It also calls for work to elect or reelect members of the Congressional Progressive, Black, and Hispanic Caucuses, as well as putting more pro-labor people in state legislatures. Special attention is called to several races including independent candidate Bernie Sanders in Vermont.
Maria Svart, national director of DSA, urges building coalitions to oppose further cuts to social spending and supporting movements capable of pressuring whichever party is in power.  DSA argues these cuts can be avoided if “Congress reversed the Bush and Reagan income tax-cuts for the top 2 percent, restoring 1960-era corporate tax rates and slashing wasteful defense spending.”
"This is a year," the statement concludes, "to take the 'democratic' part of our democratic socialism very seriously."
Please see the complete statement including budget alternatives below.

DSA, the principal U.S. affiliate of the Socialist International, is the largest socialist political organization in the country, with more than 6,000 members and active locals in more 40 U.S. cities and college campuses.
More information on DSA is available at its website, www.dsausa.org. The complete statement is on the website at http://www.dsausa.org/NewsFromDSA/2012/16aug2012.htm
Persons available for press comments.

The posts on this blog are selected by members of the Progressive Alliance Board to reflect the perspectives of the Sacramento Progressive Alliance. No authors of original material receive contributions from campaigns or political committees as defined by the California Fair Political Practices Commission.
At times we post videos from a variety of sources.  We follow the guidelines of Fair Use for these posts. We receive no contributions for these postings.
The posts on this blog are expressions of our Freedom of Speech as protected by the U.S. Constitution and our right to participate in political debate.
Posted by Duane Campbell at 3:29:00 PM