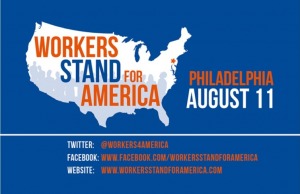 Here is the call for today's Workers Stand for America rally. You can watch it live on the WSFA website at 11 am ET.
Workers Stand for America
A cross section of working Americans are gathering in Philadelphia Aug. 11 because it's time to change the conversation in America -- to counter those forces preaching austerity for the vast majority of citizens and focus national attention on jobs, economic opportunity and restoring the American dream for all.
We are gathering to call public and media attention to how our politics, society and economy have been skewed beyond recognition -– geared almost entirely to the well-being of the richest while everyone else is left behind.
This is not acceptable in a nation that was built on generations of labor.

The event is timed to precede both the Republican and Democratic national conventions to make it clear we are broadcasting our message to both parties. A strong and prosperous America can’t be measured by the stock market or gross domestic product, but by economic opportunity and hope –- hope that our children and grandchildren will have the same shot at the American dream that we did.
We choose to assemble in Philadelphia because it is there that the words “life, liberty and the pursuit of happiness” changed the world. It is in Philadelphia that the Bill of Rights, the most practical enumeration of fundamental human values, was adopted. We choose Philadelphia because it is time for a second Bill of Rights, inspired by President Franklin Roosevelt’s 1944 proposed economic Bill of Rights.

As the Allies closed in on victory near the end of World War II, President Roosevelt laid out his vision of postwar America –– a nation where every American would be entitled to decent work, education, medical care and retirement security.
For a country rebounding from the worst effects of the Great Depression, it was an inspiring vision of an America committed to individual freedom and economic opportunity for all:

Today, Roosevelt's call for true economic and individual freedom is more relevant than ever. Income inequality continues to grow by leaps and bounds, while wages continue their steep decline.
Access to a decent education continues to narrow. The average student loan debt load is growing bigger every year, while good jobs for new graduates are harder and harder to find.
At the same time, our democratic process has become warped beyond recognition by the rush of corporate cash in the wake of the Citizens United Supreme Court decision that unleashed corporate money into electoral politics.
On Aug. 11 we will call on working people from all walks of life to sign America's Second Bill of Rights, which will be presented to delegates at the Republican and Democratic national conventions. Through media of every form, we will deliver the message to working families throughout America and put public officials on notice that working people are tired of being ignored.
We will not accomplish everything in one day or with one event, but we must start somewhere.
We hope you can join us - in the streets of Philly, on Twitter and Facebook, and in the months to come as we build a grassroots army to put this country back on the road toward economic opportunity for all.
Posted by Duane Campbell at 11:32:00 AM