Barack Obama charts an Arc of History that bends toward justice 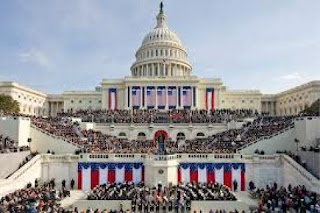 Barack Obama, the president who publicly swore his second oath of office on the Bibles of Abraham Lincoln and the Rev. Martin Luther King Jr., used his inaugural address to chart an arc of history from the liberation movements of the sixteenth president's time through the civil rights movements of a century later to the day on which hundreds of thousands of Americans packed the National Mall to cheer for the promise of an emboldened presidency.
Obama charterd that arc in a remarkable soliloquy that spoke of a fundamental America duty to provide "hope to the poor, the sick, the marginalized, the victims of prejudice":
Not out of mere charity, but because peace in our time requires the constant advance of those principles that our common creed describes; tolerance and opportunity, human dignity and justice. We the people declare today that the most evident of truth that all of us are created equal--is the star that guides us still; just as it guided our forebears through Seneca Falls and Selma and Stonewall; just as it guided all those men and women, sung and unsung, who left footprints along this great mall, to hear a preacher say that we cannot walk alone; to hear a King proclaim that our individual freedom is inextricably bound to the freedom of every soul on Earth.
The recalling of the honored ground where Americans refused anymore to accept the diminishment of women, of people of color, of lesbians and gays were meaningful. They recognized Dr. King's recollection at the close of the Selma to Montgomery march that abolitionist Theodore Parker had promised: "Even though the arc of the moral universe is long, it bends toward justice."

With his mentioning of the Stonewall protests, where the gay rights movement took form, Obama went further than any president in the country's history to complete a circle of inclusion. But Obama, often and appropriately criticized for his caution, did not end on that high note. He went further still.
The president linked the historical reference, the rhetorical flourish, with contemporary struggles over specific issues.
It is now our generation's task to carry on what those pioneers began, for our journey is not complete until our wives, our mothers and daughters can earn a living equal to their efforts.
Our journey is not complete until our gay brothers and sisters are treated like anyone else under the law, for if we are truly created equal, then surely the love we commit to one another must be equal, as well.
Our journey is not complete until no citizen is forced to wait for hours to exercise the right to vote.
Our journey is not complete until we find a better way to welcome the striving, hopeful immigrants who still see America as a land of opportunity, until bright young students and engineers are enlisted in our workforce rather than expelled from our country.
Our journey is not complete until all our children, from the streets of Detroit to the hills of Appalachia to the quiet lanes of Newtown, know that they are cared for and cherished and always safe from harm.
That is our generation's task, to make these works, these rights, these values of life and liberty and the pursuit of happiness real for every American.
Amid the poetry, there was a muscular agenda: pay equity, voting rights, immigration reform, gun control. In other sections of the speech, there were specific reference to addressing climate change--an issue too long neglected by leaders of both parties--and to renewing a frayed commitment to education. And in others, still, not just to ending wars but to a renewed faith that enduring security and lasting peace do not require perpetual war. This is a long way from "swords into ploughshares." But it was also a long way from "the Bush doctine." Perhaps long enough to be an Obama doctrine defined by "the courage to try and  resolve our differences with other nations peacefully--not because we are naive about the dangers we face, but because engagement can more durably lift suspicion and fear."
And there was more, much more. There was the vital recognition that poverty is form of oppression--not a moral failing. "We are true to our creed when a little girl born into the bleakest poverty knows that she has the same chance to succeed as anybody else because she is an American, she is free, and she is equal not just in the eyes of God but also in our own," said Obama. A beautiful statement, yes. Significantly, in a time of debate about the future of governing commitment to those whose dreams have been so long deferred, Obama completed the arc from FDR and LBJ to today, not just mentioning but defending Social Security, Medicare and Medicaid.
We, the people, still believe that every citizen deserves a basic measure of security and dignity. We must make the hard choices to reduce the cost of health care and the size of our deficit.
But we reject the belief that America must choose between caring for the generation that built this country and investing in the generation that will build its future.
For we remember the lessons of our past, when twilight years were spent in poverty and parents of a child with a disability had nowhere to turn. We do not believe that in this country freedom is reserved for the lucky or happiness for the few. We recognize that no matter how responsibly we live our lives, any one of us at any time may face a job loss or a sudden illness or a home swept away in a terrible storm. The commitments we make to each other through Medicare and Medicaid and Social Security, these things do not sap our initiative.
They strengthen us.
They do not make us a nation of takers. They free us to take the risks that make this country great.
That last line referenced the "makers versus takers" language of Congressional Budget Committee chairman Paul Ryan, the Wisconsin Republican who as his party's presidential nominee suggested that the 2012 election was in many senses a battle between an imagined majority and a dismissed 47 percent.
As it happened, Ryan and Mitt Romney won just 47 percent of the vote on November 6. Barack Obama and Joe Biden won 51 percent, and with it a mandate that Obama seems willing finally to embrace. The Barack Obama who began his first term as a remarkably popular figure who seemed almost overwhelmed by the challenges left over from the failed president of George W. Bush begins his second term as a confident leader who knows well that he made mistakes of strategy and position in his first term and who is determine this time to chart a different course.
Will Obama disappoint in this second term? Yes. Will he need to be poked and prodded, chastised and challenged by Americans who demand that the progressive language of his inaugural address be--in Obama's words--"made real"? Absolutely. More so now than ever.
But with this inaugural address President Obama has offered an indication that he heard the American people on November 6. They were not re-electing him merely because they liked him as a man. They were re-electing him to dispense with the fantasy--entertained not just by Republicans but by too many Democrats--that "freedom is reserved for the lucky or happiness for the few." And to complete the journey from Seneca Falls to Selma to Stonewall and to the place of economic justice where every citizen has that basic measure of security and dignity that can and must be America's promise.
Posted by Duane Campbell at 7:57:00 PM