Not the time for budget cuts

by Duane Campbell.
The discussion pushed by the Peterson Institute seeks to focus on the deficit and budget cuts instead of jobs.  This approach is called austerity. 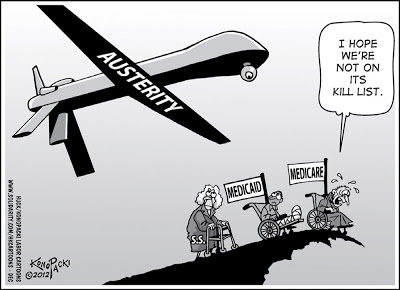 In economics, Austerity is the  policy of reducing government spending by cutting social services such as health care, education, food assistance, and other welfare assistance.  Governments   reduce spending by cutting money for these and similar services.  At the federal level, Republicans seek austerity by cutting Social Security and Medicare. In the case of state governments in the U.S., public tax money is used for police, fire fighters, park services, nurses, doctors, social workers and health assistants.  Austerity programs cut these services.
In the current economic crisis, the governments of Ireland, Greece, Italy , Spain and Portugal have implemented austerity programs and cut their budgets.  This policy  created more unemployment and made the recessions in these countries worse.


In the U.S. most states must produce a “balanced” budget.  During the economic crisis fewer items were purchased such as clothes, cars, and homes  and more people were out of work- thus they paid fewer taxes.  Since the states had less money from taxes, they adopted austerity policies and cut employment and  public services.  They cut the services known as the social safety net, food assistance, child care, and other supports.  Austerity policies can be counter-productive because reduced government spending can increase unemployment and thus cost more money for unemployment insurance, food assistance, and other safety net programs. These cut backs made the recession  worse and last longer.
While unemployment remains high and economic growth slow, the government should not impose austerity measures that reduce essential programs that benefit the middle and working classes and that shred the safety net for the most vulnerable. Rather, government policy should prioritize investments in job creation, public education and healthcare reform, while raising essential revenues by taxing the large corporations and wealthiest citizens who can afford to pay.