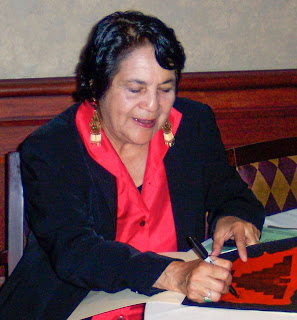 Dolores Huerta  will be inducted into the   California Hall of Fame (2013) for her labor and community leadership.  She was awarded the Presidential Medal of Freedom in 2012.

Huerta has contributed to movements for union rights and  social justice  since the founding along with Cesar Chaves, Philip Vera Cruz   and others  of the United Farm Workers (UFW) union and she continues  through her current work in supporting union democracy,   civic engagement and empowerment of women and youth in disadvantaged communities. The creation of the UFW changed the nature of labor organizing in the Southwest and contributed significantly to the growth of Latino politics in the U.S.  In her frequent public engagements at college, universities and high schools  she presents  a Latina feminist perspective to civil rights and immigration issues.  Dolores continues active as  a supporter on union picket lines and union struggles throughout the state.

Achievements:
A staunch advocate for women’s rights and reproductive freedom, Huerta is a founding board member of the Feminist Majority Foundation and serves on the board of Ms. Magazine and she is an Honorary Chair of  DSA ( along with Cornel West).   She frequently speaks at universities and organizational forums on issues of unions,  social justice and public policy. Dolores  continues working to develop community leaders and advocating for the working poor, immigrants, women and youth as President of the Dolores Huerta Foundation.
Some of her prior  awards.  Presidential Medal of Freedom • U. S. Department of Labor Hall of Honor • Smithsonian Institution – James Smithson Award • National Women’s Hall of Fame • American Civil Liberties Union (ACLU) Roger Baldwin Medal of Liberty Award • The Eugene V. Debs Foundation Outstanding American Award • The Ellis Island Medal of Freedom Award • Icons of the American Civil Rights Movement Award