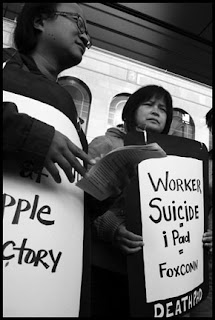 At the Ali Enterprises garment sweatshop in Pakistan in 2011, 300 people burned to death - the largest factory fire in world history. Last year in Bangladesh workers jumped from the windows of the burning Tazreen factory because the doors were locked, falling to the pavement below as their sisters had done in the notorious Triangle Shirtwaist fire in New York City in 1911. In the Foxconn plant in China, where the iPads and iPhones are assembled, workers were pushed so hard that they began to kill themselves in 2010.

And during the week of April 21, over 350 workers were killed when the Rana Plaza building collapsed. Factory owners refused to evacuate the building after huge cracks appeared in the walls, even after safety engineers told them not to let workers inside. Workers told IndustriALL union federation representatives they'd be docked three days pay for each day of an absence, and so went inside despite their worries.

Not good for the corporate image of WalMart, whose clothes were sewn at Tazreen, or Apple, whose iPads and iPhones are put together at Foxconn. Not good for J. C. Penney, Benetton or the Spanish clothing brand El Corte Inglés, whose labels or cutting orders were found in the rubble at Rana Plaza. According to the International Labor Rights Forum, "one of the factories in the Rana complex, Ether-Tex, had listed Walmart-Canada as a buyer on their website."
When workers started committing suicide at Foxconn, protestors held signs with their names in front of Apple's flagship store, demanding better conditions.  But the strategy employed by most large manufacturers is not to improve the conditions that kill workers. They are especially unwilling to recognize workers' unions that would act as monitors and enforcers of signed agreements guaranteeing livable wages and safety procedures that wouldn't put lives at risk.

Chinese immigrants in San Francisco protest the suicides of Foxconn workers because of the long hours and bad conditions at the factory in southern China, where the Apple iPad is manufactured. ( photo above)

Instead, the big label companies "helped spawn an $80 billion industry in corporate social responsibility (CSR) and social auditing," according to a new report by the AFL-CIO, Responsibility Outsourced. "Yet the experience of the last two decades of 'privatized regulation' of global supply chains has eerie parallels with the financial self-regulation that failed so spectacularly..." That CSR industry, the report charges, "helped keep wages low and working conditions poor, [while] it provided public relations cover for producers."