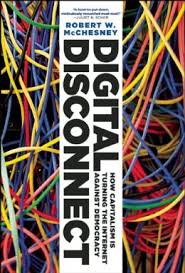 Digital Disconnect- How Capitalism is Turning the Internet Against Democracy.
Robert W. Mc Chesney is one of the nations’ leading analysts of media and monopoly, and his   “Digital Disconnect- How Capitalism is Turning the Internet Against Democracy,”  is an excellent analysis of the  problem where a medium with the capacity to empower people is itself becoming a tool of social control.
In the first three chapters Robert McChesney provides  a substantive,  sophisticated yet transparent description of  the political economy of the United States.  That alone justifies a read, given how too many left activists fail at seeing the intersection of politics and economics and end up locked into offering a  far too weak Keynesian stimulus policy  as the alternative to capitalist austerity measures. McChesney offers a better, more complete view  through  rendering an astute  political economy of journalism, communications and media.

After establishing his political economy baseline, the author documents the takeover of the internet and much of our media by corporate oligarchs.  As McChesney argues. if you have a social system dominated by a power and economic elite, they are going to shape new enterprises to fit their capitalist interest not only in profit making but in propaganda. In describing the recent developments he asserts,  “ As a rule, policies will be made by elites and self interested commercial interests, unless there is a organized popular intervention.” “ (91)

The writer also  provides an extensive discussion of the important issue of copyright, and how the extension of copyright by the media oligarchy substantially reduces and limits the free sharing of ideas.   (Readers  not familiar with  this development would do well to look at the discussion at www.creativecommons.org.)

Corporate rule of course is not new, though its evolving forms need to be understood.  Charles Ferguson’s film, “ Inside Job”, and the follow up book  “Predator Nation: Corporate Criminals, Political Corruption, and the Hijacking of America” (2012)  traces  finance capital’s  domination of  the U.S. government and how it produced the most recent economic crisis.   In  “Digital Disconnect”  readers benefit from the long critical scholarly record of Robert McChesney  in studying corporate journalism as an imbedded form of corporate capitalism  and its challenge to democracy.  As he says, “capitalism imposed its logic.” ( p.89)

McChesney   combines both his extensive knowledge of political economy and media studies to clarify several of the vital conflicts between corporate media control and democratic interests.  In chapter 4, The Internet and Capitalism, he does not accept  the fanciful utopian views of digital democracy being promoted by the Google, Apple, Microsoft and other large corporate conglomerates . For him, capitalism won and democracy lost. His is  a valuable and needed  alternative to popularly  promoted views of the Net  such as Eric Schmidt of Google and Jared Cohen in he New Digital Age: Reshaping the Future of People, Nations and Business” (2013).

Can we good guys win?. After detailing the  perilous decline of journalism since the emergence of the Internet, where more that four in 10  paid journalist positions where lost   during corporate consolidation  of the media and where many major cities have been reduced to one-paper town,  McChesney  is not optimistic. But the struggle continues.

As good as McChesney is, I think one conclusion is overly broad. McChesney argues that the 2008/2009 economic collapse and the continuing economic crisis reveal, “The system is failing, conventional policies and institutions are increasingly discredited, and fundamental changes of one form or another are likely to come, for better or worse.” (p.221). The fact is that while  our media and telecom institutions, including Time Warner, News Corp. Disney, General Electric, Viacom, Comcast and others, as well as Internet giants Google, Apple, Yahoo, Facebook, Microsoft, etc. have been widely criticized, they’ve yet to be discredited. That’s our Achilles Heel. Too few in  the democracy  movements yet understand the importance of corporate capitalist control of our media. In that light, “Digital Disconnect”  is an excellent book for moving the progressive  agenda and building a movement that knows you can’t have a democratic society without a democratic media.

Activists will   greatly benefit from McChesney’s clear and substantive analysis of how capitalism  undermined a potential for democratic media and the democratic project itself.   I urge all to read this important book  to understand the depth and complexity of capitalist control of the internet, of media , and how they use their control to dominate our elections, our government and to prevent the development of democracy.

Duane Campbell. With editorial assistance from Michael Hirsch.
Duane Campbell is a professor (emeritus) of bilingual multicultural education at California State University Sacramento. His most recent book is Choosing Democracy: a Practical Guide to Multicultural Education. He is on the editorial committee of this blog and he blogs at www.choosingdemocracy.blogspot.com