Fracking in California is bad for us all 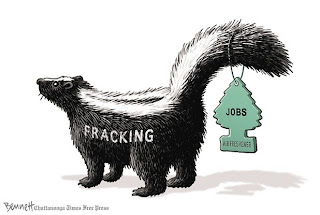 A new form of fracking (horizontal hydraulic fracturing), using deep L-shaped wells, lets gas drillers get at large deposits that were previously inaccessible, giving the companies a new lease on life. Where a short while ago they were facing dwindling gas reserves and questions about the future of their business, now they see a hundred-year inventory within their grasp.

Current regulation is pathetic due to exemptions secured by the gas drilling industry from many major federal environmental laws, including the Safe Drinking Water Act, Clean Air Act and Clean Water Act. As a result, gas drilling companies can disregard requirements that other industries have to follow. Among other things, in most places they do not have to identify the toxic chemicals they use in their operations, despite the risks those chemicals pose to drinking water.

With the federal government's role limited, it has been largely left to the states to regulate gas drilling, which they are woefully unequipped to do, given their low staffing levels. Further, the agencies responsible for regulation are typically also responsible for promoting use of natural resources in the state and are often overly cozy with the companies they are supposed to regulate.

Oil companies, represented by the Western States Petroleum Association (WSPA), are increasingly interested in fracking the Monterey Shale, an oil-laden geological formation beneath some of the state’s most productive farmland, important fish and wildlife habitat and scores of towns and cities. Much of the shale is located off the California coast in and near controversial "marine protected areas" that fail to protect the ocean from fracking, oil drilling, pollution and other human impacts other than fishing.

Fish and wildlife are also at risk. Fish, including endangered Central Valley Chinook salmon and steelhead, can die when fracking fluid contaminates streams and rivers. "Birds can be poisoned by chemicals in wastewater ponds and the intense industrial development that accompanies fracking pushes threatened or endangered animals out of wild areas they need to survive," Siegel stated.

"Drilling and fracking also release huge amounts of methane, an extremely powerful global warming gas," said Siegel. "Methane is about 105 times more potent than carbon dioxide as a greenhouse gas over a 20-year period. Burning the estimated 15.5 billion barrels of oil in the Monterey Shale will generate more than 6.6 billion metric tons of carbon dioxide, according to calculations based on Environmental Protection Agency figures."