How the elite rule- Krugman 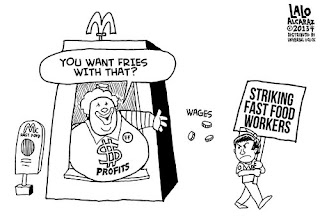 'To this day, one often hears pundits and
establishment types in general talking as if we had a
clear distinction between the elite, who know How
Things Work, and the great unwashed who need to
be led to elite wisdom. The reality, however, is
nothing like this. It's true that there are crank
doctrines - goldbuggery, the Laffer curve,etc. -
that play a substantial role in popular opinion but
have no traction with the elite. But the elite itself
has spent much of the past five years committed to
economic doctrines - the prevalence of structural
unemployment, the urgency of deficit reduction and
entitlement reform, the destructive effects of
"uncertainty" - that may not be quite as contrary to
the evidence as fears of hyperinflation just around
the corner, but are pretty bad. And the influence of
these doctrines has remained almost unscathed
even though this past year should have driven them
completely out of respectable discussion.'
Economist Paul Krugman
New York Times
August 7, 2013
Posted by Duane Campbell at 2:17:00 PM