Join the March on Washington 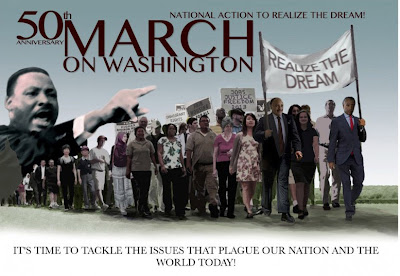 Join DSA at the March on Washington

Why We March
DSA is an official partner organization sponsoring the August 24, 2013 March on Washington 50 years after activists, led by Martin Luther King, Jr., marched on Washington for Jobs and Freedom.  That march, and the years of organizing which preceded it, built public pressure and helped lead to landmark civil rights legislation and later the expansion and protection of voting rights.


But we do not march simply to celebrate past victories.  Today the extremist forces that were defeated 50 years ago have regained new life. We face a moral, economic and political crisis illustrated by the legislation these forces have successfully implemented in many states:
•                Voter suppression laws that have the potential to prevent millions of mostly voters of color and low income voters from voting. The Supreme Court decision striking down the main enforcement provision of the Voting Rights Act has already resulted in a flurry of new voter suppression laws.
•                30 states have enacted Stand Your Ground laws which encourage the use of guns, making it much harder –as the Trayvon Martin case demonstrates—to prosecute murderers. The right-wing enthused over the verdict because they understood it to mean that in our culture you could still get away with killing a black man.
•                Anti-abortion laws imposing mandatory, unnecessary and invasive ultrasound provisions on women in order to humiliate and discourage them from exercising their right to an abortion and setting technical rules for abortion clinics that will result in making access virtually unavailable in many states, particularly for poor, young, and rural women.
•                Restricting the rights of workers to unionize and imposing limitations on collective bargaining for public employees.
The sad fact is that the basic demand of the 1963 March on Washington, Jobs and Freedom, remains unfulfilled. The only path to victory is to organize, protest, and vote.
Power concedes nothing without a demand !    DSA will have a contingent of marchers as well as a post-march reception near the Capitol.   DSA  Meeting Point between 8:00am and 11:00am – Jefferson Dr. SW at 14th St. (2 blocks from Smithsonian Metro stop). This is on the Independence Ave (south) side of the National Mall. We will meet with DSA banners to march together. Bring your own signs, too!
DSA Reception from 2:00pm and 5:00pm