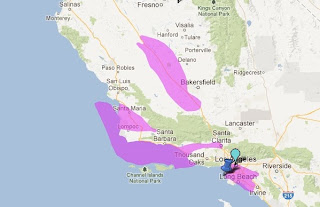 Fracking, short for hydraulic fracturing, is a water-intensive process where millions of gallons of fluid – typically water, sand, and chemicals, including ones known to cause cancer – are injected underground at high pressure to fracture the rock surrounding an oil or gas well. This releases extra oil and gas from the rock, so it can flow into the well, according to Food and Water Watch.

SB 4 would require permits for fracking, acidizing and other oil well stimulation practices, according to a news release from Senator Pavley's Office on August 30. Supporters of the legislation include the Natural Resources Defense Council, Environmental Working Group and California League of Conservation Voters,

“This bill will address serious unanswered questions about the safety and environmental risks of fracking and acidizing,” Senator Pavley claimed. “California needs strict regulations to hold the oil industry accountable for the true costs of its activities."

However, over 100 groups, including the Sierra Club, Food & Water Watch, MoveOn.org Civic Action, CREDO, Friends of the Earth, California Water Impact Network (C-WIN) and the Center for Biological Diversity, oppose Pavley's bill, saying it will pave the way for increased fracking.

“Senate Bill 4, already a seriously flawed bill, has been further undermined and does not protect Californians from the threats that fracking poses to our water, air and communities,” said Adam Scow, California campaigns director for Food & Water Watch. “It's time for Senator Pavley to drop this bill.”

“New amendments to Senator Pavley’s Senate Bill 4 could pave the way for more fracking between now and 2015,” said Ross Hammond, senior campaigner with Friends of the Earth. “The latest round of amendments would require state officials to continue allowing fracking while environmental review would be conducted only after the fact.”

Key dangerous provisions in the latest amendments include:

• New language added to the bill specifies that “no additional review or mitigation shall be required” if the supervisor of the Division of Oil, Gas and Geothermal Resources “determines” that the proposed fracking activities have met the requirements of the California Environmental Quality Act.

"This provision could be used by DOGGR to bypass CEQA’s bedrock environmental review and mitigation requirements," according to the groups. "This language could also prevent air and water boards, local land use jurisdictions and other agencies from carrying out their own CEQA reviews of fracking."

• In addition, under existing law, the governor and DOGGR can deny approvals for wells that involve fracking or place a partial or complete moratorium on fracking. The new language states that DOGGR “shall allow” fracking to take place until regulations are finalized in 2015 provided that certain conditions are met.

"This could be interpreted to require every fracked well to be approved between now and 2015, with environmental review conducted only after the fact, and could be used to block the Governor or DOGGR from issuing a moratorium on fracking prior to 2015," the groups stated.

“With the new amendments added, Senator Pavley's weak fracking bill has gone over the edge and become dangerous,” said Zack Malitz, campaign manager for CREDO Action, “If this bill passes as amended, it will allow the fracking industry to shoot holes in CEQA, potentially exempting fracking from our state's most important environmental law. It's time for Senator Fran Pavley to withdraw this hopelessly compromised bill.”

“With the greatest respect for Senator Pavley and her efforts this session, we urge her to withdraw this bill because it could undermine existing environmental law and leave Californians in the short term with even fewer protections from fracking than the law currently provides,” said Kassie Siegel, director of the Center for Biological Diversity’s Climate Law Institute.

Catherine Reheis-Boyd, president of the Western States Petroleum Association and former Chair of the MLPA Blue Ribbon Task Force to create alleged "marine protected areas" in Southern California, declined to comment on the details of discussions of Senate Bill 4 with lawmakers, according to the Sacramento Bee.

However, she "dismissed the notion that her organization is trying to avoid the CEQA review process, which the Division of Oil, Gas, and Geothermal Resources, or DOGGR, administers for wells." (http://blogs.sacbee.com/capitolalertlatest/2013/09/energy-industry-seeking-ceqa-exemptions-in-fracking-bill.html

"The environmental groups that are claiming that WSPA is trying to exempt hydraulic fracturing from CEQA review are just misstating the facts," Reheis-Boyd told the Bee.

Ironically, Reheis-Boyd and her colleagues on the MLPA Blue Ribbon Task Force made sure that the so-called "marine protected areas" created under their "leadership" failed to protect the ocean from the destructive activities of the oil industry and other ocean industrialists.

Oil companies have fracked at least 12 times in California's ocean waters, according to information received from Freedom of Information Act documents obtained by truthout.org and the Associated Press. The California Coastal Commission has pledged to investigate the environmentally destructive oil extraction method, including what powers the agency has to regulate it.(http://www.mercurynews.com/central-coast/ci_23876202/californias-coastal-commission-investigate-offshore-fracking)

The evidence of the enormous threat that fracking poses to fish, water, air and the environment continues to pile up. Oil companies have used 12 dangerous “air toxic” chemicals more than 300 times in the Los Angeles Basin in recent months, according to a new report from the Center for Biological Diversity that is already drawing concerned reactions from public health advocates and an L.A. city councilmembers. Air toxics are chemicals considered among the most dangerous air pollutants because they can cause illness and death. (http://www.indybay.org/newsitems/2013/09/05/18742764.php)

For more information and to sign the petitions to ban fracking in California, visit: http://www.CaliforniansAgainstFracking.org

Senate Bill 4 must be approved on the Assembly Floor and return to the Senate Floor for "concurrence" (to reflect changes since it was first approved by the Senate) before it can be sent to the governor.

As the battle to stop fracking in California build momentum, the Brown and Obama administrations are fast-tracking the Bay Delta Conservation Plan (BDCP) to build the peripheral tunnels under the Sacramento-San Joaquin River Delta. The tunnels will be used to export huge quantities of water to corporate agribusiness interests and oil companies seeking to expand fracking operations in Kern County and coastal areas.

The complete failure of the state and federal governments to stop or even regulate the environmentally destructive practice of fracking in California's ocean waters is no surprise to those of us familar with the corrupt Marine Life Protection Act (MLPA) Initiative – or anybody who has read my investigative news pieces on this topic.

Catherine Reheis-Boyd, the same lobbyist now leading the charge to expand fracking in California, apparently used her role as a state marine “protection” official to increase her network of influence in California politics to the point where the Western States Petroleum Association has become the most powerful corporate lobby in California.

The oil industry now exceeds corporate agribusiness, the computer and software industry, the film and television industry, the aerospace industry and other major corporate players in California politics in the power that it wields.

The association now has enormous influence over both state and federal regulators – and MLPA Initiative advocates helped facilitate her rise to power. (http://www.counterpunch.org/2013/08/07/the-ocean-frackers/)

Oil and gas companies spend more than $100 million a year to buy access to lawmakers in Washington and Sacramento, according to Stop Fooling California, an online and social media public education and awareness campaign that highlights oil companies’ efforts to mislead and confuse Californians. The Western States Petroleum Association (WSPA) alone has spent more than $16 million lobbying in Sacramento since 2009.

The association spent the most of any organization in first six months of 2013, $2,308,789.95, to lobby legislators and other state officials, according to documents filed with the California Secretary of State.

When the oil industry wields this much power - and an oil industry lobbyist oversaw the process that was supposed to "protect" the ocean - it shouldn't be a surprise to anybody that California's ocean waters, as well as farmland, are now being "fracked." Both the state and federal regulators have completely failed in their duty to protect our ocean, bays, rivers and Delta.

For more information about the MLPA Initiative, go to: http://intercontinentalcry.org/the-five-inconvenient-truths-about-the-mlpa-initiative/
Posted by Duane Campbell at 8:27:00 PM