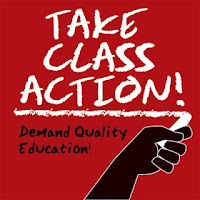 Defend Ethnic Studies- Or we will lose them.

At several  CSU campuses including San Jose, Bakersfield, Long Beach, Sacramento State, and elsewhere ethnic studies professors are not being replaced, classes are being reduced and majors could be eliminated.
See: https://sites.google.com/site/chicanodigital/home/faculty-retention-at-csus--2011
And, see: https://sites.google.com/site/chicanodigital/home/the-creation-and-demise-of-bilingual-education-at-csu-sacramento-2


This letter went to CSU Presidents, the Chancellor, and the California State Assembly.
Dear California State University Campus Presidents,
The California Faculty Association’s Council for Affirmative Action and Board of Directors are writing to you out of a deep concern for an emerging pattern on a number of campuses within the CSU—an initiative to drastically cut existing race and ethnic studies departments or to merge them into larger departments. To our knowledge these efforts have either already started or are being considered at San Jose State, CSU Bakersfield, and Long Beach State to name but a few.
While it may seem tempting to try and find campus “efficiencies” in the name of austerity, there are larger issues at stake here. We believe that those issues must influence decisions that have a significant social and political impact.


In this particular historic moment our nation has come face to face with the fact that life and death issues of race still plague our country. The outcome of the Zimmerman trial, the outrage that followed it, the fact that the President of the United States has spoken frankly about the impact of our failure to grapple with issues of race, all highlight the important role that universities can play in creating positive social change.
Indeed, ethnic studies departments in the CSU are at the forefront in leading students to balanced, critical, and open discussions of racial and ethnic matters that, unfortunately, have yet to be resolved in the US, as the Zimmerman trial and verdict so clearly indicated.
These departments deliver the university’s interest in diversity as a core principle and practice, not only by serving majors and minors but also by fulfilling students’ GE requirements in cultural diversity and critical thinking, among other areas. Quite frankly, these departments educate students in the cultural literacies required if they are to be effective leaders capable of addressing the complicated social and cultural issues that are a part of an increasingly diverse U.S.
Moreover, ethnic studies departments supplement academic support services in the CSU by providing models, advisers, and mentors to students of color and other students. Additionally, these departments provide vital links to the diverse communities the CSU serves and from which it draws students, faculty, staff and financial resources.
Now is not the time to be shrinking or burying academic curriculum that takes on these critical issues. Instead we must commit ourselves to helping all of our students wrestle with the reality of race in America and aspire to create a better society for all of us.
We cannot allow the notion of austerity to undermine our responsibility to our students and to the role we play in creating a more just society. The events of recent months should be a wakeup call that the small savings that could be realized by cutting and subsuming these departments would have a huge long-term cost.
Page 1 of 2
The California State University is better than this. Given the diversity of our students, we should take a leadership role in providing the kind of education that will help our students be part of the solution to our country’s struggle with issues of equity. We call on each campus president, the Chancellor and Board of Trustees of this great system to view these programs (and others) not as impediments to efficiency, but rather as opportunities to help us all live up to the best in ourselves and in our history.
We ask that you declare a moratorium on further program changes until an assessment of the programs and their impacts can be conducted. In the case of the proposed changes in the Department of Africana Studies at CSU, Long Beach, Chancellor White has requested a two-year postponement until such an assessment can be conducted. We agree with the Chancellor’s decision and ask that the same consideration be extended to these other programs as well. We also ask you to consider holding campus wide discussions on the issues raised by the Zimmerman verdict so that we can turn this tragedy into a teachable moment. This is an opportunity for the greatness of the California State University system to be realized.
We have attached a copy of a recently passed Assembly Concurrent Resolution supporting the continuation of Africana studies programs in California’s institutions of higher education.
In solidarity,
Lillian Taiz
President
California Faculty Association
Cc: CSU Chancellor Timothy White
Cecil Canton
Associate VP Affirmative Action Chair, Council for Affirmative Action California Faculty Association