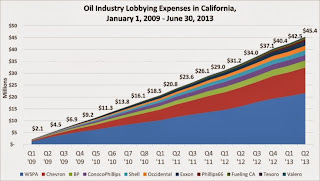 by Dan Bacher
A new report released by the American Lung Association reveals that the oil industry lobby, the biggest corporate lobby in California, has spent $45.4 million in the state since 2009.
The report was unveiled at a crucial time in California environmental politics – just a couple of weeks after Governor Jerry Brown signed Senate Bill 4, the green light to fracking bill, and less than 10 months after a network of so-called “marine protected areas” created under the “leadership” of a big oil industry lobbyist and other corporate operatives was completed on the California coast.