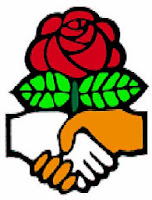 The Government is Open: Now fight for Just Government Policies
By Joseph M. Schwartz
Progressives  welcome the defeat of Republican efforts to use the government shutdown and the threat of government default  to overturn the Affordable Care Act.  This is a victory for majoritarian democratic government over an extreme minority’s attempt to overturn democratic legislation.
But the democratic left should also be aware  that a victory over minoritarian extremism could well be followed by a bi-partisan budget agreement  that would further gut anti-poverty programs such as Food Stamps, WIC, and Head Start, cut the real value of Social Security, and curtail Medicare and Medicaid funding.
The Senate bill that will reopen the government through Jan. 15 and extend the debt ceiling until Feb. 7 will be accompanied by a motion that instructs House and Senate negotiators to reach accord by Dec. 13 on a blueprint for taxing and spending over the next decade. The elite Washington consensus between Republicans and moderate Democrats in favor of fiscal austerity threatens to yield a bi-partisan long term budget agreement that would gut the historic gains of the New Deal and Great Society programs.


Already, the self-described bi-partisan “fix the debt” crowd  –  epitomized by Pete Peterson, the former Lehman Brothers and Blackstone Group executive, and New York Times columnist Thomas Friedman – have called for the House and Senate budget negotiators to raise the age for Social Security eligibility, cut the real value of Social Security through a new “chained CPI” cost of living index, and curtail the growth in funding for Medicare and Medicaid.  They claim that we cannot afford investment in our future – and in our young – if we don’t cut “overly generous” payments to the elderly.
Absent pressure from below, President Obama is likely to endorse such a long-term budget accord. Both the President and the beltway bi-partisan elite have no idea what it means for blue collar and retail sales workers to be forced to work beyond the age of 67 nor do they understand  that 70 per cent of retirees get the bulk of their retirement income from Social Security. We could shore up Social Security funding if we simply raised the cap on the amount of income taxed for Social Security.  We could also afford a high-quality, universal health care system if we replaced our wasteful private insurance system with a single-payer “Medicare for All” program. Finally, we could increase funding for Head Start and institute publicly financed childcare if we cut our wasteful imperial military budget and restored effective corporate and upper-income tax rates to those of the pre-Reagan era.
Only if we overturn the bi-partisan consensus in favor of “austerity” budgeting can we achieve social justice for all.  Gains in the quality of life for the vast majority won’t come from corporate-backed Washington political elites but from the pressure of grassroots democratic movements on elected officials. That’s why progressive activists should work to build the immigrant rights movement and join the struggles of low-wage workers for dignity on the job. The United States remains the wealthiest country in the world. We can readily afford justice for all, but only if those who produce the wealth democratically control it.
Joseph M. Schwartz is vice-chair, Democratic Socialists of America and professor of political science, Temple University.
Individually signed posts do not necessarily reflect the views of DSA as an organization or its leadership.