Obama Visits With Immigration Activists Fasting on the National Mall 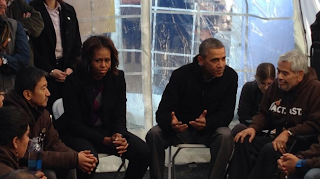 President Barack Obama and First Lady Michelle Obama stopped by the National Mall on Friday, the day after Thanksgiving, to speak with immigration reform activists who are fasting as part of an effort to push Congress to act on a path to citizenship for millions of the nation's undocumented immigrants.
"The President and the First Lady are visiting individuals taking part in Fast For Families on the National Mall and offer their support for those who are fasting on behalf of immigration reform," a White House official said, according to a pool report.
Activists have been fasting on the National Mall since Nov. 12 and have attracted several White House and Congressional leaders who have visited to show solidarity. The Obamas spoke with 18 day fasters and two activists who have been fasting for 18 days: Eliseo Medina (left) and Dae Joong Yoon (right), and thanked them for their "sacrifice and dedication."

"The President told them that it is not a question of whether immigration reform will pass, but how soon," a White House official said. "He said that the only thing standing in the way is politics, and it is the commitment to change from advocates like these brave fasters that will help pressure the House to finally act."
During a speech centered on immigration in San Francisco on Monday, Obama noted, the "brave advocates who have been fasting for two weeks in the shadow of the Capitol, sacrificing themselves in an effort to get Congress to act."
Posted by Duane Campbell at 4:53:00 PM