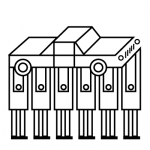 In yesterday’s New York Times [1], Robert Pear reports on a little known fact about Obamacare: the insurance packages available on the federal exchange have very high deductibles. Enticed by the low premiums, people find out that they’re screwed on the deductibles, and the co-pays, the out-of-network charges, and all the different words and ways the insurance companies have come up with to hide the fact that you’re paying through the nose.

For policies offered in the federal exchange, as in many states, the annual deductible often tops $5,000 for an individual and $10,000 for a couple.
Insurers devised the new policies on the assumption that consumers would pick a plan based mainly on price, as reflected in the premium. But insurance plans with lower premiums generally have higher deductibles.
In El Paso, Tex., for example, for a husband and wife both age 35, one of the cheapest plans on the federal exchange, offered by Blue Cross and Blue Shield, has a premium less than $300 a month, but the annual deductible is more than $12,000. For a 45-year-old couple seeking insurance on the federal exchange in Saginaw, Mich., a policy with a premium of $515 a month has a deductible of $10,000.
In Santa Cruz, Calif., where the exchange is run by the state, Robert Aaron, a self-employed 56-year-old engineer, said he was looking for a low-cost plan. The best one he could find had a premium of $488 a month. But the annual deductible was $5,000, and that, he said, “sounds really high.”
By contrast, according to the Kaiser Family Foundation, the average deductible in employer-sponsored health plans is $1,135.

Ed. Note:  He is  not saying that Covered California is a bad deal.  Only that you should look closely at the annual deductible as well as the monthly premium.