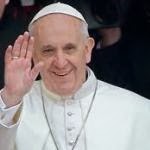 Remember when the Occupy movement [1] demanded that issues like income inequality [2], race-to-the-bottom globalization and the failures of the free market be placed on the agenda?
Remember the silly critique [3] of Occupy that said the movement’s necessary challenge to austerity lacked specifics?
Problem solved.
The pope has gotten specific.
Condemning the “new tyranny” of unfettered capitalism and the “idolatry of money,” Pope Francis argues in a newly circulated apostolic exhortation [4] that “as long as the problems of the poor are not radically resolved by rejecting the absolute autonomy of markets and financial speculation and by attacking the structural causes of inequality, no solution will be found for the world’s problems or, for that matter, to any problems.”
The pope has taken a side, not just in his manifesto but in interviews, warning: “Today we are living in an unjust international system in which ‘King Money’ is at the center.”
He is encouraging resistance to “the absolute autonomy of the marketplace and financial speculation [5]” that creates “a throwaway culture that discards young people as well as its older people [6].”


“What I would tell the youth is to worry about looking after one another and to be conscious of this and to not allow themselves to be thrown away,” he told a television audience in his native Argentina [7]. “So that throwaway culture does not continue, so that a culture of inclusion is achieved.”
The reference to a “culture of exclusion” is not casual.
In his manifesto, the pope decries the current “economy of exclusion and inequality.”
“Such an economy kills,” he explains [4]. “How can it be that it is not a news item when an elderly homeless person dies of exposure, but it is news when the stock market loses two points? This is a case of exclusion. Can we continue to stand by when food is thrown away while people are starving? This is a case of inequality. Today everything comes under the laws of competition and the survival of the fittest, where the powerful feed upon the powerless. As a consequence, masses of people find themselves excluded and marginalized: without work, without possibilities, without any means of escape.”
What makes the contribution from Pope Francis to the emerging global dialogue about the next economy so significant is his explicit rejection of the basic underpinnings of the broken economic models that have created the current crisis—of the failed ideas that, remarkably, continue to be promoted by fiscal fabulists like House Budget Committee chairman Paul Ryan [8].
“Some people continue to defend trickle-down theories which assume that economic growth, encouraged by a free market, will inevitably succeed in bringing about greater justice and inclusiveness in the world,” writes the new pope in his manifesto [9]. “This opinion, which has never been confirmed by the facts, expresses a crude and naïve trust in the goodness of those wielding economic power and in the sacralized workings of the prevailing economic system. Meanwhile, the excluded are still waiting. To sustain a lifestyle which excludes others, or to sustain enthusiasm for that selfish ideal, a globalization of indifference has developed.”
As a global figure with a significant following and an ability to speak to the political and corporate elites, Pope Francis’ voice may be heard where others are dismissed. And the fact that he is embracing a critique of capitalism that has come from the streets—rather than the apologias issued from the suites—has the potential to move the debate. The point here is not to suggest that the dictates of any religious leader will be followed by Wall Street or Washington—nor that pronouncements from the Vatican are going to guide the economic and social discourse of secular society.
The point is to recognize that an alternative argument has taken shape. And new voices are being added to the chorus of complaint about an austerity agenda that would undermine universal guarantees such as Social Security, Medicare and Medicaid, cut food stamps, and barter off basic services such as the Post Office, while at the same time restructuring tax and regulatory policies in order to redistribute wealth upward.
The world is in the midst of a rapidly evolving—and absolutely vital—debate about “the dictatorship of an impersonal economy lacking a truly human purpose.”
On one side are the billionaires and their political pawns, angling for more of the income inequality that has so benefited them.
On the other side are labor [10] unions, anti-poverty campaigners, Occupy activists—and a pope who [7] argues [4] that “money must serve, not rule!”