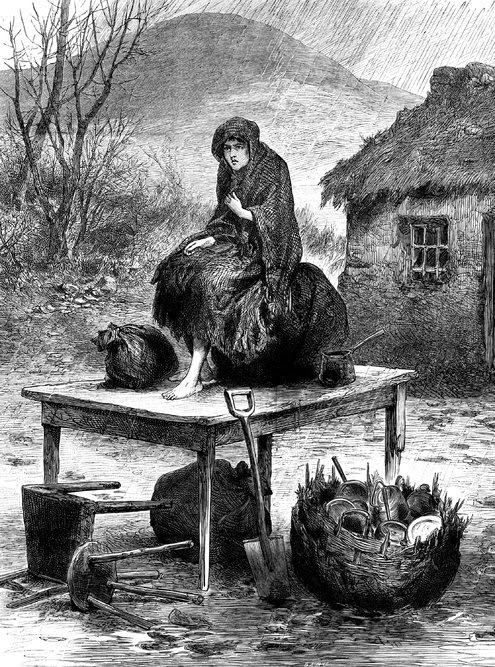 An Irish girl guarding her family’s last few possessions after eviction for nonpayment of rent, during the potato famine. A wood engraving from The Illustrated London News, April 1886.
Credit Print Collector/Getty Images

IN advance of St. Patrick’s Day, I went time traveling, back to the 1840s and Ireland’s great famine. On one side of the Irish Sea was Victorian England, flush with the pomp and prosperity of the world’s mightiest empire. On the other side were skeletal people, dying en masse, the hollow-bellied children scrounging for nettles and blackberries.
A great debate raged in London: Would it be wrong to feed the starving Irish with free food, thereby setting up a “culture of dependency”? Certainly England’s man in charge of easing the famine, Sir Charles Trevelyan, thought so. “Dependence on charity,” he declared, “is not to be made an agreeable mode of life.”
And there I ran into Paul Ryan. His great-great-grandfather had fled to America. But the Republican congressman was very much in evidence, wagging his finger at the famished. His oft-stated “culture of dependency” is a safety net that becomes a lazy-day hammock. But it was also England’s excuse for lethal negligence.
There is no comparison, of course, between the de facto genocide that resulted from British policy, and conservative criticism of modern American poverty programs.


But you can’t help noticing the deep historic irony that finds a Tea Party favorite and descendant of famine Irish using the same language that English Tories used to justify indifference to an epic tragedy.
The Irish historian John Kelly, who wrote a book on the great famine, was the first to pick up on these echoes of the past during the 2012 presidential campaign. “Ryan’s high-profile economic philosophy,” he wrote then, “is the very same one that hurt, not helped, his forebears during the famine — and hurt them badly.”
What was a tired and untrue trope back then is a tired and untrue trope now. What was a distortion of human nature back then is a distortion now. And what was a misread of history then is a misread now.
Ryan boasts of the Gaelic half of his ancestry, on his father’s side. “I come from Irish peasants who came over during the potato famine,” he said last year during a forum on immigration.
BUT with a head still stuffed with college-boy mush from Ayn Rand, he apparently never did any reading about the times that prompted his ancestors to sail away from the suffering sod. Centuries of British rule that attempted to strip the Irish of their language, their religion and their land had produced a wretched peasant class, subsisting on potatoes. When blight wiped out the potatoes, at least a million Irish died — one in eight people.
“The Almighty, indeed, sent the potato blight, but the English created the famine,” wrote the fiery essayist John Mitchel, whose words bought him a ticket to the penal colony of Tasmania.
What infuriated Mitchel was that the Irish were starving to death at the very time that rich stores of grain and fat livestock owned by absentee landlords were being shipped out of the country. The food was produced by Irish hands on Irish lands but would not go into Irish mouths, for fear that such “charity” would upset the free market, and make people lazy.
Ryan’s running mate in 2012, Mitt Romney, made the Tory case with his infamous remark that 47 percent of Americans are moochers, “dependent upon government.” Part of that dependence, he said, extended to people “who believe that they are entitled to health care, to food, to housing, to you name it.” Food — the gall!
You can’t make these kinds of heartless remarks unless you think the poor deserve their fate — that they have a character flaw, born of public assistance. And there hovers another awful haunt of Irish history. In 2012, Ryan said that the network of programs for the American poor made people not want to work.
On Wednesday, he went further, using the language of racial coding. This, after he told a story of a boy who didn’t want his free school lunch because it left him with “a full stomach and an empty soul.” The story was garbage — almost completely untrue.
“We have this tailspin of culture, in our inner cities in particular, of men not working and just generations of men not even thinking about working or learning the value and the culture of work.” In other words, these people are bred poor and lazy.
Where have I heard that before? Ah, yes — 19th-century England. The Irish national character, Trevelyan confided to a fellow aristocrat, was “defective.” The hungry millions were “a selfish, perverse, and turbulent” people, said the man in charge of relieving their plight.
You never hear Ryan make character judgments about generations of wealthy who live off their inheritance, or farmers who get paid not to grow anything. Nor, for that matter, does he target plutocrats like Romney who might be lulled into not taking risks because they pay an absurdly low tax rate simply by moving money around. Dependency is all one-way.
“The whole British argument in the famine was that the poor are poor because of a character defect,” said Christine Kinealy, a professor of Irish studies and director of Ireland’s Great Hunger Institute at Quinnipiac University. “It’s a dangerous, meanspirited and tired argument.”
And it wasn’t true. The typical desperation scene of the famine was the furthest thing from a day in the hammock. Here’s what one Quaker relief agent, William Bennett, found in a visit to County Mayo in 1847:
“We entered a cabin. Stretched in one dark corner, scarcely visible from the smoke and rags that covered them, were three children huddled together, lying there because they were too weak to rise, pale and ghastly ... perfectly emaciated, eyes sunk, voice gone, and evidently in the last stage of actual starvation.”
For his role in the famine, Trevelyan was knighted. The Irish remember him differently. At Quinnipiac’s Great Hunger Museum hangs a picture of this English gentleman with a dedication: “For crimes against humanity, never brought to justice.”
Irish Alzheimer’s, goes the joke, is to forget everything but the grudges — in the case of the great famine, for good reason. What Alexis de Tocqueville called “the terrifying exactitude of memory” is burned into Ireland’s soil. But more than forgetting, Paul Ryan never learned.
From the New York Times.