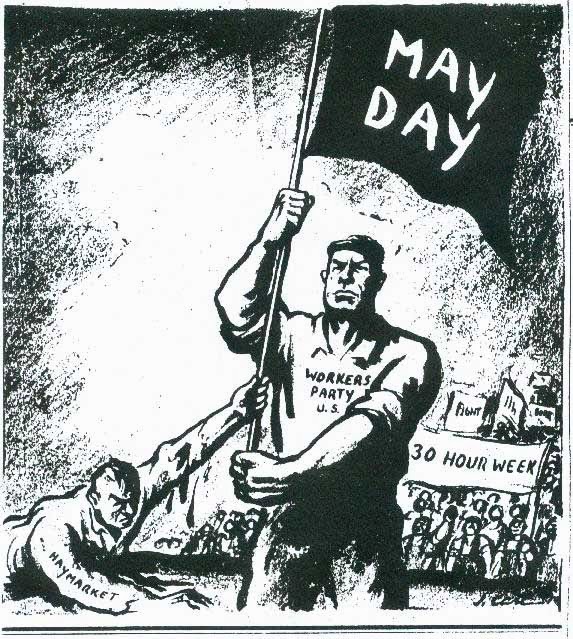 For generations, May Day, the International Workers Day celebrated by working people in more than 200 countries, was ignored in the United States, the country of its origin. In fact, the annual holiday is as American as cherry pie, commemorating as it does the 1886 nationwide general strike in which U.S. trade unionists — largely foreign-born — walked off the job in support of an eight-hour workday.
This year’s observance marks the 128th anniversary of that campaign to humanize the workday — and of the tragedy at Chicago’s Haymarket Square that followed three days later.
Back in 1886, when the typical work day was 10, 12 or even 14 hours long and joblessness was rife, the demand for a work day limited to eight hours at decent wages was viewed as dangerously radical. The eight-hour-day movement was spearheaded by two organizations, the craft-dominated Federation of Organized Trades and Labor Unions (the forerunner of the American Federation of Labor) and the Knights of Labor.
An 1884 proclamation from the Federation pledged that “eight hours shall constitute a legal day’s labor from and after May 1, 1886.” A circular of the time calling for a massive work stoppage on that date read, “Lay down your tools, cease your labor, close the factories, mills and mines” and demand “eight hours of work, eight hours for rest, eight hours for what you will.” Nationwide, anywhere from 150,000 to 500,000 workers — the number is in dispute — answered the call, though the epicenter of the strike effort was indisputably Chicago.


University of Massachusetts-Boston historian James Green, whose 2006 book Death in the Haymarket: A Story of Chicago, the First Labor Movement and the Bombing That Divided Gilded Age America is both indispensible and gripping reading, wrote that “What happened on May 1, 1886 was more than a general strike; it was a ‘populist moment’ when working people believed they could destroy plutocracy, redeem democracy and then create a new ‘cooperative commonwealth.’” It was not to be; at least not yet.
Today’s May 1 observance is also associated with Chicago’s infamous May 4 Haymarket Square tragedy that same year. Thousands of labor activists had gathered in the square that evening to protest law-enforcement attacks on the strikers. When the peaceful rally was winding down, riot police marched into the crowd, demanding that everyone disperse. An unknown assailant tossed a homemade bomb at the line of police, killing one. In the chaos that ensued, at least a dozen people were killed, including six more police officers, all from gunshot-related wounds. Eight of the movement’s leaders, two of whom were not even present at the rally, were charged with murder and conspiracy.
The prejudicial trial took place in a hothouse atmosphere. Typical was the Chicago Tribune’s demand for the deportation of immigrants it labeled “ungrateful hyenas” and “foreign savages who might come to America with their dynamite bombs and anarchic purposes.” The prosecution offered no evidence for its contention that the defendants plotted to target police at the demonstration; it argued simply that the remarks of the rally speakers constituted incitement to violence. All eight were found guilty of murder and four of the eight were eventually hanged. Authorities used the incident to launch a massive witch hunt and arrest hundreds of labor leaders, which put a halt to the eight-hour campaign for years.
The eight-hour day finally became a reality only in 1938, when the New Deal’s Fair Labor Standards Act made it a legal day’s work throughout the nation.
May 1 was adopted as a holiday internationally in 1890 and is even a national holiday in more than 80 countries, though not in the United States. In 1921, following a postwar Red Scare and the forced deportation of thousands of foreign-born workers — virtually all Southern and Eastern Europeans — May Day was named “Americanization Day” as a slap at all foreign-born workers, then seen as dangerous radicals. During the Cold War, Congress sought to reclaim May 1 from “red sympathizers” by proclaiming it Loyalty Day, a day to reaffirm loyalty to the United States. The association of May 1 with communism was abetted by the Soviet Union, which used the date for parading military hardware and rattling sabers.
Despite these efforts to sanitize May Day and make it a holiday celebrating national and ruling elite interests as opposed to working class and common people’s needs and dreams, May Day  for the most part maintained its traditional focus, especially in Europe and Latin America, where socialist and labor parties of various hues put forward a variety of reform and radical demands. In some Latin American countries, May Day is even used by their governments to announce wage increases.
May 1 was revived as a day to mark worker rights in the United States in 2006, when immigrant workers participated in giant demonstrations on that day in New York and Los Angeles in their fight for immigration reform and a path to citizenship. In 2012, much of the Occupy movement added its support and presence as well.
Uniting the twin fights for worker and immigrant rights that trace back to the birth of May Day, rally participants this year will protest a variety of inequities, from union busting and attacks on public and private-sector workers, long-term unemployment, outsourcing and the shift of jobs overseas, the soaring cost of higher education and the increasing precarious conditions for even the college-educated, to anti-immigrant attacks and mass deportations and the need for  equitable legislation establishing a path to citizenship.
Things you can do. Join with DSA  Honorary Chair Eliseo Medina  in the Immigrants’ Rights campaign www.fast4families.org.
Participate in a May Day/ labor celebration in your area.

Michael Hirsch, a longtime union activist and DSA member, is a New York-based labor and political writer. An earlier version of this article appeared on Talking Union, DSA’s labor blog, on May 2, 2011.