Why we do electoral work

In 2014 the Left  should  turn to electoral campaigns as one element of our political strategy.  As we know, the U.S. political system is overrun by money.  Economic power at the top is used to produce political results  in Congress and in elections.  The rich get richer while the middle stagnates and the poor get screwed.
Our response must be encouraging  more voting not less.  The lack of interest in electoral participation expressed in many places is not progress for the left, rather it reveals a lack of interest in defending democracy. Not voting is giving up on what democracy we have.  Yes, our democracy  is truncated, exploited, and distorted by economic power , but we need to grow and expand democracy, not abandon it.
We can make a difference in the electoral arena.  We recognize that many  working people  have a general distrust of political parties- and often  the parties  deserve this distrust  Working people do not have- in most cases- representatives in our government nor a party which fundamentally represents our  interests.  While the parties divide on some issues, both  mainstream parties are dominated by corporate interests.
Both parties have failed working  people  and, our democracy is weaker for this.  In response millions, about half of all the eligible voters, do not even vote. They do not believe that their participation matters. This is a frightening defeat for democracy.

Voter  turnout matters.  For example, in California turnout was critical in 1994 in losing Proposition 209 ( Affirmative Action) and in 1996  in losing Prop. 227 (anti bilingual education ). In 2012 increased turnout made possible passage of Prop.30- a tax on the rich to fund schools and social services.
Read more »
Posted by Duane Campbell at 2:53:00 PM No comments:

antiracismdsa: New Senate Bill Fails To Address Root Causes of Ce...: The Republican bill in the House is far worse. http://noticias.univision.com/video/488477/2014-07-29/noticiero-univision/videos/duras-co...
Posted by Duane Campbell at 10:18:00 AM No comments:

Hearing by the Congressional Progressive Caucus.  Thank them.

Cecily McMillan + after release from jail

Cecily Mc Millan is a member of Democratic Socialists of America
Posted by Duane Campbell at 5:02:00 PM No comments:

Democratic Party’s Divide on Education Policy gets Worse
Jeff Bryant
Political pundits who try to tamp down talk of divisions within the Democratic Party must not be paying any attention to education policy.
For quite some time, close observers of the nation’s education policy have been calling attention to the fault lines between education progressives in the Democratic Party and Third Way-style centrists, such as Secretary of Education Arne Duncan and Democrats for Education Reform, who lean toward a market-based, econometric philosophy for public education governance.
As Furman University education professor Paul Thomas recently wrote for Alternet, “While the Obama administration has cultivated the appearance of hope and change, its education policies are essentially slightly revised or greatly intensified versions of accountability reform begun under Ronald Reagan.”
But the Democratic Party’s divergence from real progressive values for governing our schools mostly went unnoticed in major media outlets until recently when a few light bulbs went off among political observers. Writing for Slate, Matt Yglesias noticed, “Education reform, not ‘populism’ divides Democrats.” Then, Connor Williams of the New America Foundation saw the light and explained for The New Republic, “In 2016, Democrats have good reason to run against Obama’s education record.”
Now, Jonathan Chait has penned a piece for New York Magazine, “Teachers Unions Turn Against Democrats,” in which he postulates that a “backlash” to President Obama’s education policies, energized by education historian Diane Ravitch, could lead to an alliance between teachers unions and, gulp, Republicans.
Read more »
Posted by Duane Campbell at 8:08:00 PM No comments:

In a fitting victory for Independence Day, SB 1272, the Overturn Citizens United Act, passed the Senate on the last legislative session before the 4th of July.  It's now on its way to Governor Brown's desk for him to sign!

SB 1272 would put a measure on this November's ballot letting Californians demand that Congress pass a U.S. Constitutional amendment that overturns its terrible Citizens United decision and that says once and for all that corporations aren't people, and money isn't speech.

Now it goes to Governor Brown's desk.  So far he hasn't committed to signing it.

Please sign the petition urging Governor Brown to sign SB 1272 to put the Overturn Citizens United Act on the ballot!

This legislative victory happened only because we all worked together.  The author of the bill, Senator Ted Lieu, and its sponsor Money Out Voters In have done a fabulous job pushing it forward.  The California Clean Money Action Fund has been happy to help.
for the national campaign see the post below.
Posted by Duane Campbell at 4:47:00 PM No comments: 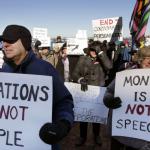 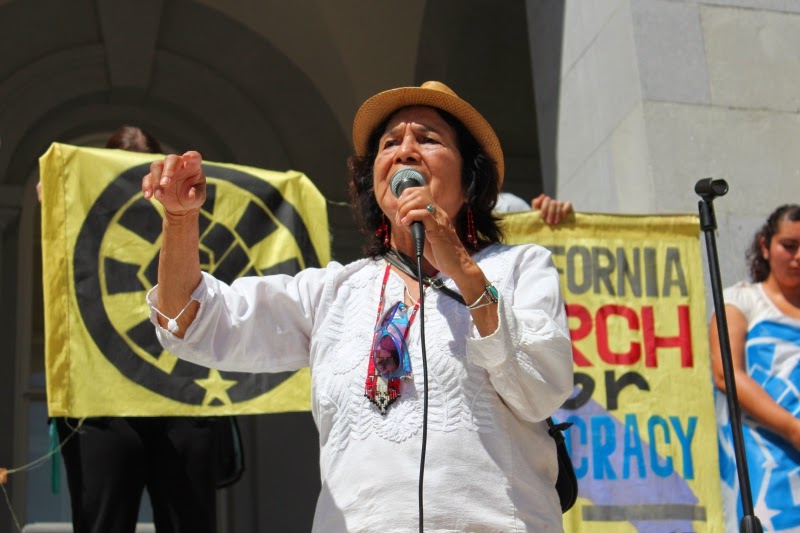 After 5 more people were arrested in the State Capitol Rotunda in Sacramento at a sit in Thursday night, activists from the group 99Rise on July 3 announced the end of their twelve-day occupation and civil disobedience campaign to get the corporate money out politics.

The unprecedented campaign resulted in 47 arrests, 2 legislative victories, and a private meeting with Governor’s Jerry Brown staff to discuss the corrupting influence of big money in politics, according to a statement from the group.

"We're in a time when corporations have more rights and have a louder voice than the people, as proven by recent Supreme Court decisions and the inability to pass legislation limiting corporation campaign contributions," said Paulina Gonzalez of Oakland, who was one of the those arrested Thursday. "I am here to send the message that corporations aren't people and that money is not free speech. This is the People's House and we have to take back our democracy."
Read more »
Posted by Duane Campbell at 8:53:00 PM No comments:

Bernie Sanders Explains How Wall Street is Robbing You at the Pump This ...

Freedom, Power, and the Conservative Mind

by Robert Reich.  On Monday the Supreme Court struck down a key part of the Affordable Care Act, ruling that privately-owned corporations don’t have to offer their employees contraceptive coverage that conflicts with the corporate owners’ religious beliefs.The owners of Hobby Lobby, the plaintiffs in the case, were always free to practice their religion. The Court bestowed religious freedom on their corporation as well – a leap of logic as absurd as giving corporations freedom of speech. Corporations aren’t people. 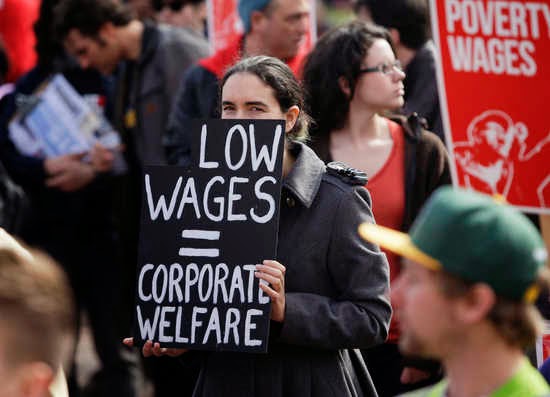 The deeper problem is the Court’s obliviousness to the growing imbalance of economic power between corporations and real people. By giving companies the right not offer employees contraceptive services otherwise mandated by law, the Court ignored the rights of employees to receive those services.
Read more »
Posted by Duane Campbell at 4:57:00 PM No comments: