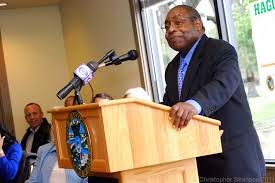 Friend, and ally, has passed.
Grantland Johnson was a progressive and an ally of DSA.  He joined us in many efforts including the fight against NAFTA, support for the Central American Solidarity Movement, as a labor ally. and the effort to use the County Supervisor position for positive goods.

By Robert D. Dávila
bdavila@sacbee.com
Published: Tuesday, Aug. 19, 2014 - 1:08 pm
Grantland Johnson, a trailblazing politician who rose in rank to serve his native Sacramento as a city councilman, county supervisor and top health official in state and federal governments, died today.
He was 65 and had been receiving dialysis in recent years for kidney failure caused by hypertension and diabetes.
Johnson was widely respected in the community as a thoughtful leader with keen political instincts and a passion for ideas. Although often viewed through the prism of race – he was the first African American elected to the Sacramento County Board of Supervisors – he was a conciliator who worked with disparate interests in search of solutions to common problems.
Appointed to the Sacramento Regional Transit board in 1976, he was elected to the Sacramento City Council in 1983. He won a close race for county supervisor in 1986 and was re-elected to a second term four years later.
He left local government in 1993 to serve in theClinton administration as Western regional director for the U.S. Department of Health and Human Services. Six years later, he was tapped by Gov. Gray Davis to be director of the California Health and Human Services Agency and served in the state Cabinet until Davis was recalled from office in 2003.
y
Posted by Duane Campbell at 5:41:00 PM