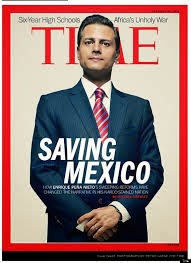 SACRAMENTO, Calif. —Mexican President Enrique Pena Nieto praised Gov. Jerry Brown and state lawmakers Tuesday for approving a series of immigrant-friendly laws, saying California is taking a lead role in the absence of national immigration reform.
He specifically mentioned a law that allows immigrants in the country illegally to obtain driver's licenses, a law that has yet to take effect because a final decision has not been made about the appearance of the licenses.
Watch the KCRA  report: Some protest as Mexican president visits Sacramento, speaks http://www.kcra.com/politics/mexican-president-to-face-protest-in-sacramento/27737714#ixzz3BZ0CXDM6
California also allows immigrants here illegally to apply for state-funded college scholarships and aid at public universities. And earlier this month, Brown and the Democratic legislative leaders announced a plan to spend $3 million to provide legal help for the estimated 3,900 unaccompanied immigrant children from Central America who are in the state.  Pena Nieto said such actions signaled that California was recognizing human dignity no matter a person's immigration status.  "The progress you have promoted not only benefits Californians because you have sent a very clear message to the U.S. and the entire world," he said during an address in Spanish to a joint session of the Legislature.  His visit followed Brown's trade mission to Mexico earlier this summer. The Democratic governor wants to promote greater cross-border cooperation with the country that is California's largest export market, most notably on alternative energy projects that could help combat climate change.
The Protest against Peña Nieto  organized by the Zapatista Solidarity Committee and others argued that Mexico is undemocratic and  suppresses political dissent.  A recent report ranks Mexico as seventh on the list of countries where journalists are killed.


Crime remains  rampant and a number of communities have organized their own self defense forces.  The leader of  one such group, a doctor named José Manuel Mireles was recently sent to prison (without trial) by President Peña Nieto for alleging that the PRI government supported the drug cartels who are responsible for the deaths of over 60,000 people.
The Sacramento Bee and Capital Public Radio decided to not cover the pro democracy- anti Nieto demonstrations  while they covered a demonstration by ultra conservative people again revealing the limits of their coverage. The demonstration was covered by KCRA and Univision.  This limited coverage reveals again why the Anglo community so often does not understand the perspective of the Latino community - currently 38 % of the California population.
See the posts on www.antiracismdsa.blogspot.com  for how the current government has attacked and destroyed one of the nation’s few independent trade unions. Major efforts of the current PRI government include assaults on unions and the sale of substantial parts of Mexico's oil industry to private corporations.

Read more: http://www.kcra.com/politics/mexican-president-to-face-protest-in-sacramento/27737714#ixzz3BZ0CXDM6
Posted by Duane Campbell at 8:00:00 AM