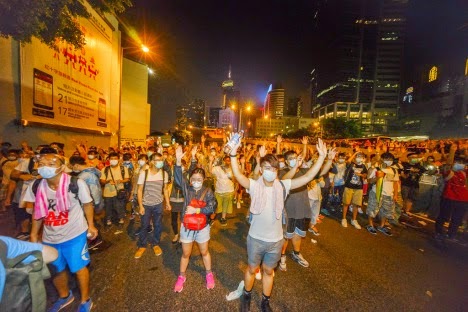 The Democratic Socialists of America supports the goals of the Hong Kong movement for democracy (the “Umbrella Movement”).
When the British handed Hong Kong over to China in 1997, the Chinese government promised both in the Sino-British Joint Declaration and the mini constitution of Hong Kong (the Basic Law) that a democratic system eventually would be implemented in Hong Kong.
However the current resolution passed by the Chinese National People’s Congress for implementing that promise by 2017 would sharply restrict candidates for political office to those preselected by an unrepresentative body representing mainly business interests.
The struggle to create a political system with more democratic self-determination is an essential step towards rectifying the growing economic inequality in Hong Kong.
As democrats and as socialists we support our sisters and brothers in Hong Kong who are fighting for the same goals we have in the USA.


High school and university students organized in the Hong Kong Federation of Students and in Scholarismo have taken the lead in organizing massive peaceful occupations and assemblies to pursue these legitimate political ends.  They have been widely supported by the independent unions of the Hong Kong Federation of Labor and by numerous civic and neighborhood associations, and by Occupy Central.
After many days of protests marked by an excessive police response, the Hong Kong government agreed to have a representative meet with the students.  However this promise for negotiations was obviated by a wave of violent attacks on peaceful protesters by thugs, often with police looking the other way or sometimes abetting the efforts of the vigilantes. The fighters for democracy have courageously resisted with nonviolent tactics.
We support the demands that repressive violence against the protesters cease, whether it comes from official government sources or from thugs acting in concert with the government.  The Hong Kong government should immediately negotiate with students and other representatives of the democracy movement to resolve the underlying issues, including the establishment of genuine universal suffrage and initial measures to restrict the growth of extreme economic and social inequality.
We applaud the initiative and courage of those participating in the Hong Kong Movement for Democracy.  We will support your struggle by making use of our own democratic rights in appropriate ways to publicize, petition and protest in solidarity with this crucial democratic movement.
See the statement and a list of actions you can take in solidarity by clicking here.
Maria Svart, DSA National Director
Posted by Duane Campbell at 9:55:00 AM