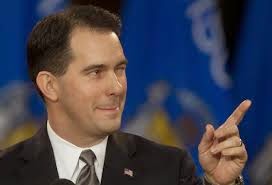 by Ned Resnikoff
Ten years ago, the notion that traditionally union-friendly Wisconsin could become a right-to-work state would have been almost unthinkable. By last week it was inevitable. Republican Gov. Scott Walker made it official Monday when he gave final approval to legislation that bars unions from collecting mandatory representation fees.
That legislation, which was hurried through the Wisconsin legislature over the past two weeks, dealt a significant blow to the state’s already beleaguered labor movement. And it was a major victory for Walker, despite his earlier insistence that he was not interested in pushing right-to-work legislation. Although he never said he would oppose such a law on the merits, he repeatedly indicated that he did not want to get involved in the sort of political battle it would likely provoke.
Now that the battle is over, the Republicans in the statehouse have passed the legislation and Walker has given it his signature, he is more than happy to claim ownership. Last week he for the first time said that right-to-work legislation was something “we” proposed in early 2015 — “we” meaning Walker and the Republican-controlled legislature, not just the latter.


President Barack Obama said in a statement that he was "deeply disappointed that a new anti-worker law in Wisconsin will weaken, rather than strengthen workers in the new economy."
Then he challenged Walker: "I’d encourage him to try and score a victory for working Americans — by taking meaningful action to raise their wages and offer them the security of paid leave. That’s how you give hardworking middle-class families a fair shot in the new economy – not by stripping their rights in the workplace."
Whatever Walker’s role in shepherding this particular bill to passage, he is right to claim some of the credit for making Wisconsin a right-to-work state. The legislation he signed into law Monday was made possible by his earlier triumphs over the state’s labor movement. His victories offer a lesson to policymakers in other states: If you intend to hobble the labor movement as a whole, go after the public sector unions first.
At a time of extreme weakness and vulnerability for the American labor movement, the public sector is a crucial bulwark. As of last year, just 6.6 percent of private employees were union members, as opposed 35.7 percent of government workers, according to the federal Bureau of Labor Statistics. Because of their numbers and the fact that members are positioned in the state bureaucracy, public sector unions are relatively influential when it comes to directing government policy: Teachers’ unions can use contract negotiations to exert modest influence over education policy, for example, and police unions can pressure cities to modify their approaches to crime reduction. Private unions may lobby the government on similar issues, but they tend to do so as outsiders.
As a result, the typical public sector union is much harder to dislodge than the typical private sector union. For an ambitious governor who seeks to break what remains of the labor movement’s power in a state, public unions represent a greater obstacle.
The right-to-work legislation that Walker signed into law applies to public and private sector unions. But that law might not have been conceivable if Walker had not first succeeded in passing Act 10, a 2011 law that applied exclusively to government employee unions. That bill struck at the core function of American labor unions: collective bargaining. Under Act 10, most state employee unions were limited to negotiating solely over their members’ salaries and virtually no other issues related to workplace conditions.
State employee unions, with the assistance of the Wisconsin Democratic Party, fought Act 10 with nearly everything they had. But Walker won that fight, with disastrous consequences for public sector labor. Union membership among government workers collapsed, dropping from 50 percent to 37 percent in just one year. By 2014, the annual budget for the Wisconsin State Employees Union shrank by two-thirds from three years earlier. If the public sector was a fortress for the state’s labor movement, then its walls had been breached.
Four years after Act 10, Wisconsin Republicans proposed right-to-work legislation that would affect both public and private sector unions, and thousands of protesters descended on the state capital to register their disapproval. But this time around, the outcome of the fight was practically a foregone conclusion. Republicans got the bill out of committee and onto the governor’s desk in short order, with little in the way of meaningful obstruction. Without the leverage to switch votes, local labor leaders said they were focused on educating the public about the harmful effects of right-to-work laws.
The GOP was able to push through right-to-work legislation with relative ease because the local labor movement had already been dealt a body blow. As a result, Wisconsin’s experience seems to have served as an object lesson for other governors who favor right-to-work policies. For example, Bruce Rauner, the recently elected governor of Illinois, has tried to impose right-to-work on the public sector by way of executive order.
Clashes between state officials and public sector unions aren’t necessarily a prelude to right-to-work bills. Even in states where such legislation is unlikely to ever be made law — including in states where the governor is a Democrat — policymakers and government employee unions are battling over issues such as pension cuts and charter school expansion. While legislative hardball over retirement funds might not be as much a threat to state employee unions as Act 10, it may do its part to sap whatever strength they have left. The implications for organized labor extend far beyond just the public sector.
Reposted from Al Jazeera.
Posted by Duane Campbell at 9:04:00 PM