Lets Put a Socialist in the White House

You don’t often get the chance to vote for an honest-to-goodness socialist, especially one who is a
seasoned politician and proud of the “s” word.
That’s why we’re so happy that Senator Bernie Sanders (I-Vermont) has announced his candidacy
for President in 2016.

Will you help us help him further a desperately needed political revolution in the USA?

Senator Sanders is a lifelong champion of the public programs and democratic rights that empower
working class people. His candidacy will help expand both the progressive movement and the
democratic socialist voice within that movement.

DSA will help Sanders build a strong, independent movement to halt the vicious attacks of Tea Party
Republicans at all governmental levels on workers' rights, voting rights, and people of color in
general. By running in Democratic Party primaries, Independent Senator Sanders will challenge the
discourse of the dominant neoliberal capitalist wing of the Democrats that privilege corporate
business interests over those of working people. DSA believes that a strong Sanders campaign will
enable many more people to become comfortable being openly socialist in mainstream politics.

Click here to volunteer with DSA as a proud socialist and help elect Bernie!

Rep.Bera is on the verge of making the wrong decision on Fast Track / Trade Promotion Authority for the Trans Pacific Partnership. We need to be loud and clear today that Fast Track is unacceptable for such a dangerous trade deal that will result in more off-shoring of jobs, increase in medicine prices, and threaten our environmental regulations.

Please take five minutes to make a call TODAY to urge Rep.Bear to VOTE NO on FAST TRACK!

Seattle says No to TPP

Why Do So Many Feel So Powerless; Reich

Why Do So Many Feel So Powerless?

Congressman Bera - No on Fast Track

Join us Thursday from 10am-6pm at Congressman Bera's office for a Stand-Off to stop the Fast Track of the TPP! Join your Union Brothers & Sisters and our Community Allies as we stand together and tell Congressman Bera that the Fast-Track of the Trans-Pacific Partnership trade agreement is a TRAIN WRECK for working families, Veterans, and the Environment!!! As we studied at the Progressive Forum last week.
Please RSVP to join us for the day, or part of the day- 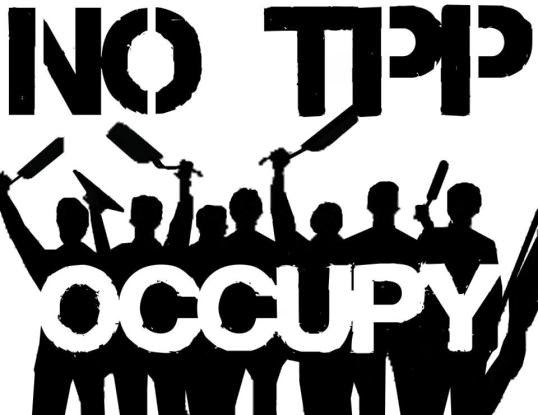 Legislation granting Fast Track trade authority to President Barack Obama was introduced in the U.S. Senate today. In a statement, AFL-CIO President Richard Trumka said:
At a time when workers all over the country are standing up for higher wages, Congress is considering legislation that will speed through corporate-driven trade deals. For decades, we’ve seen how fast-tracked trade deals devastated our communities through lost jobs and eroded public services. We can’t afford another bad deal that lowers wages and outsources jobs.
Call your senators—855-790-8815—and tell them to say no to Fast Track.
See article here. http://www.dsausa.org/greasing_the_fast_track_to_global_catastrophe_dl
Fast Track would make it easier to ram through complicated trade deals without significant oversight from members of Congress or the public, just a simple "Yes" or "No" vote with no amendments allowed on trade agreements such as the Trans-Pacific Partnership (TPP).
Sen. Sherrod Brown (D-Ohio), who has been a leading voice in the Senate against Fast Track, said:
There’s too much at stake for Congress to be rushing through a bill that would allow more NAFTA-style trade deals. Our manufacturing sector has lost more than 5 million jobs since 1994. While we’ve seen an impressive recovery, the more than 629,000 Ohio jobs tied to the auto industry could be at risk if our trade deals don’t protect against competitors that cheat trade law or manipulate currency. Rushing a trade package through Congress without a healthy debate is not only reckless, but it’s a betrayal to middle class and working families in Ohio.
Trumka called on Congress to reject Fast Track and “maintain its constitutional authority and leverage to improve the TPP and other trade deals.” He added:
Trade deals have wide-ranging impacts and shouldn’t be negotiated behind closed doors and then rubber-stamped.  The current Trans-Pacific Partnership deal under discussion would cover 40 percent of the world’s GDP.  A deal this big should be debated in a full and open manner like every other piece of legislation.
On Saturday, a coalition of labor, environmental, consumer, faith, farm, business and other groups is staging a national day of action to stop Fast Track. Click here to find a Fast Track action near you.
From the AFL-CIO blog.
Posted by Duane Campbell at 9:52:00 AM No comments: 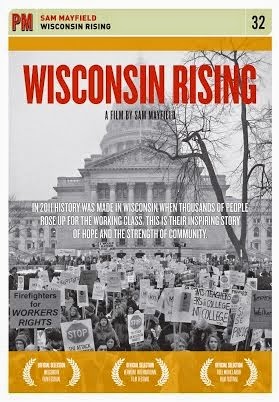 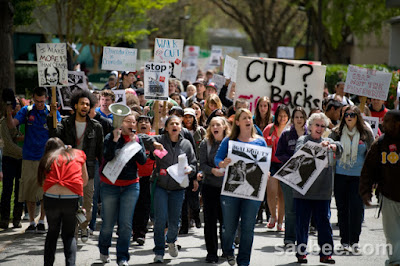 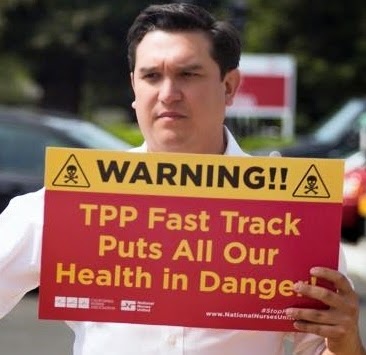 And a Panel of Student
and Community Activists
Thursday, April 16th, 3pm
Hinde Auditorium
Sacramento State University Union
More Info: paulb@csus.edu
Posted by Paul B at 12:36:00 AM No comments:

Raise the Minimum Wage to $15 Per Hour 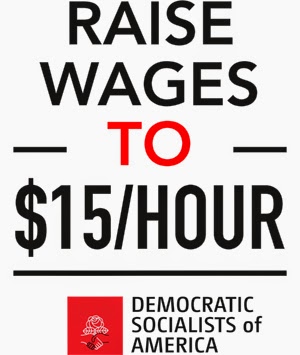 
Preliminary announcement.
Posted by Duane Campbell at 10:21:00 AM 2 comments: 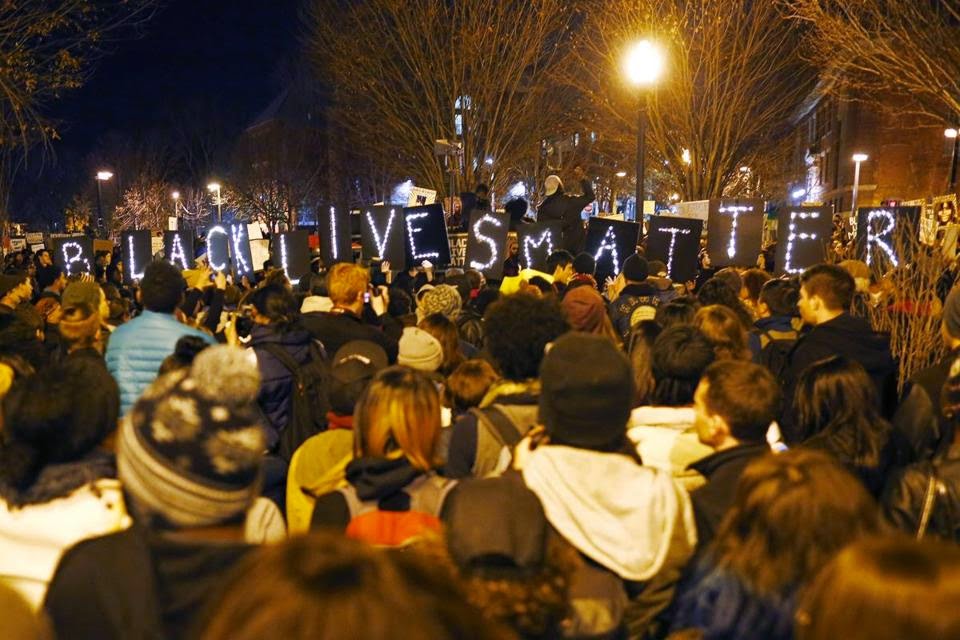 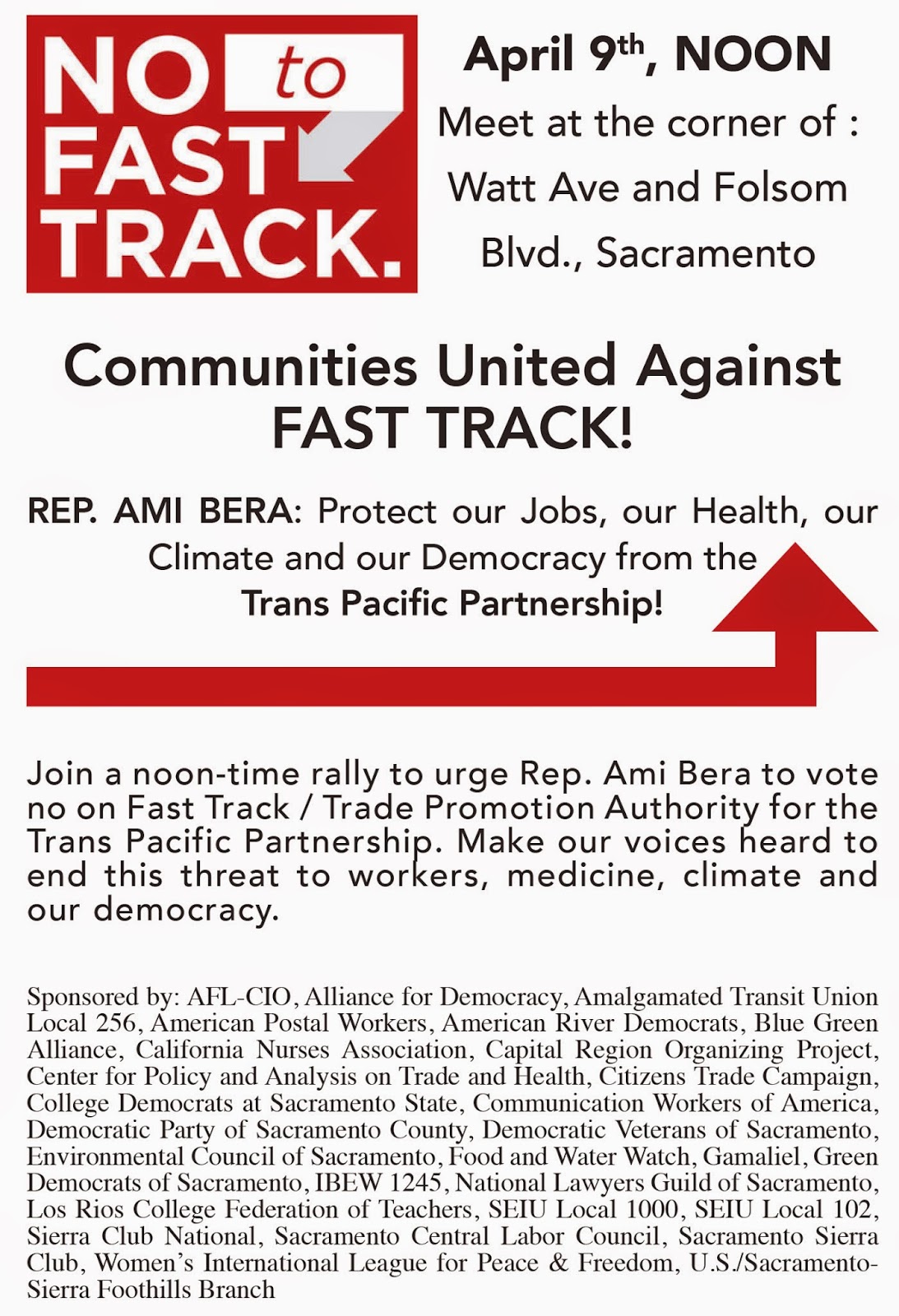 Congratulations Eric !
Posted by Duane Campbell at 8:04:00 AM No comments:

Eric Guerra, a candidate who worked his way up. 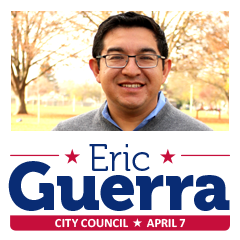 Endorsed by Progressive Alliance, Calif. Nurses, Los Rios Federation of Teachers.
Marcos Breton. Sacramento Bee
Sitting in a Sacramento diner on Friday morning while preparing to go door to door in his campaign to win a City Council seat, Eric Guerra shook his head while considering his life of achievement over poverty.
“Sometimes even I can’t believe that I am here,” said Guerra, 36, a policy analyst at the state Capitol who is running to fill the Tahoe Park/Elmhurst/College Greens council seat recently vacated by Kevin McCarty. Absentee ballots go out March 9, and election day is April 7.
One of the most interesting candidates to seek political office in the state capital in some time, Guerra has gone from farmworker kid, to college student living out of his car, to student body president at Sacramento State, to an advanced degree, a sought-after job, a home, family and a community where he is a budding leader.
“From where I was to middle class in less than a generation, “ Guerra said. “Where else can you do that?”
Guerra could become the first Latino elected to the Sacramento City Council in nearly 20 years, but that designation sells him short.