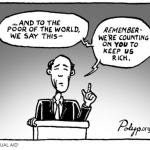 Bill Fletcher, Jr. is the host of the Global African on Telesur-English, the author of They’re Bankrupting Us: And Twenty Other Myths About Unions, and the co-author of Solidarity Divided: The Crisis in Organized Labor and a New Path to Social Justice. His website is www.billfletcherjr.com [17].
- See more at: http://portside.org/print/2015-06-01/neoliberalism-has-created-new-system-dual-citizenship-poor-and-1#sthash.yUPCXEJi.dpuf
Posted by Duane Campbell at 1:24:00 PM