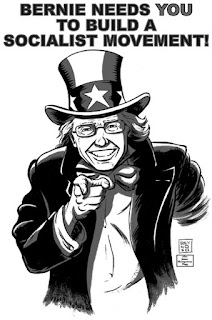 As the rise in popularity of Bernie Sanders over the last six months has confirmed, voters — including many first-time voters — are excited about the possibility of a Sanders presidency. Despite the stigma once attached to his identification with democratic socialism,  he continues to surge in the polls, raise record-breaking amounts of grassroots donations and draw tens of thousands to volunteer and attend events.

Sanders is calling, explicitly, for a “political revolution.” But what does that mean?

Calls for revolution are part of  U.S.  political DNA. However, the word is used so often  that many don’t have a firm grasp on its true meaning. To this end, People for Bernie, Sacramento for Bernie,  and the Democratic Socialists of America are working together on the Political Revolution 101 Tour, a political education and campaign training project coming to Sacramento in early February. Watch for date, time and place.
The tour will combine trainings in GOTV, basic organizing methods, and communications, our political education training will also enable thousands to better understand, articulate and persuade voters with an understanding  of the opportunities of this political moment.

Here, in broad outline, are the major topics that will be covered in the Political Revolution 101 tour:
(1) What is the nature and limits of the U.S. political system?
(2) How do the dominant ideas and ideology of the U.S. elite work to manufacture consent and seek to cut off avenues of change?
(3) What does a “political revolution” mean? How might it result in changing control of decision making in the U.S. economy?
(4) What does democratic socialism mean to Sanders? How do we deepen and extend the conversation that Sanders started on democratic socialism?

People for Bernie is a volunteer group of independent supporters of the Bernie Sanders campaign formed last April, before the official launch. Many of its members hail from Occupy Wall Street and the now defunct Ready for Warren campaign to draft Elizabeth Warren for President.

Democratic Socialists of America (DSA) ) is the largest socialist organization in the United States. DSA's members are building progressive movements for social change while establishing an openly democratic socialist presence in American communities and politics. DSA fights for reforms that will weaken the power of corporations and increase the power of working people. Our vision is of a society in which people have a real voice in the choices and relationships that affect the entirety of our lives. We call this vision democratic socialism — a vision of a more free, democratic and humane society.

In Sacramento we are partnering with the Sacramento Progressive Alliance and other local activist groups to offer the workshop.  Watch this blogsite for more information.
See post Socialism and Black America on this site.


Not authorized by any candidate or candidate’s committee.