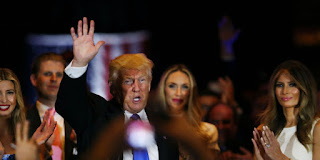 Now that Ted Cruz and John Kasich have dropped out of the race and Donald Trump is the “presumptive nominee,” it’s likely we’ll see the GOP establishment pretend to be rallying behind Trump while in reality helping him very little.
The same Republican leaders who mined birtherism, xenophobia, and racist dog whistles for political gold, and who failed to stop the Trump clown car when they had the chance, are now gearing up to pantomime a unified party.
Reliable number crunchers have already compiled masses of data showing that Trump is toxic with women voters, Latinos, evangelicals, immigrants, Muslims and other religious minorities (especially Mormons), and young people.
Add this level of voter estrangement to the rancor the Republican establishment has already shown toward Trump, ranging from grudging acceptance to outright opposition, and there emerges an anti-Trump pincer movement with crucial blocs of voters rejecting him from below, while big Republican donors and party insiders rebuff him from above.


It’s hard to imagine Ohio governor John Kasich or other establishment GOP leaders handing over to Trump the reins of their local party organizations to do with as he pleases. If they play their cards right they can have it both ways: show their donors they’re party loyalists while quietly helping to derail Trump.
If the powerbrokers of the Republican National Committee give Trump lukewarm support he’ll need to build his own ground operations. Trump might be a billionaire blowhard who brags about his money, but it’s doubtful his pockets are deep enough to finance his own machines in the big swing states.
Looking at this bizarre election it’s clear that the Trump vanity candidacy has been all along a media-fueled, Twitter-driven phenomenon. News media producers and pundits across the spectrum, from Fox News to MSNBC, given that the Trump Show drives ratings, will continue to give him free airtime while fueling the horse race.
In Republican states Trump will do well against whoever is the Democratic nominee. Losing large numbers of evangelicals or other religious conservatives won’t matter much. But in states like Ohio, Virginia, Colorado, and Pennsylvania, if the evangelicals and religious conservatives stay home, given their importance to the Republican base, Trump will be in trouble.
It’s doubtful he has the time or the money to convert his reality show into a national campaign that can turn out enough enraged white voters to win in November. Democrats, if they’re smart, will overstate Trump’s appeal stressing that he could ride the voters’ anger into the White House. It’s called “poor-mouthing.” The candidate that appears to have all the advantages insists the race is razor close, thereby energizing supporters.
Neither the corporate media (for business reasons) nor the Democratic establishment (for political reasons) have any incentive other than to call this race a toss up. But not only has Trump alienated crucial blocs of voters, part of the Republican establishment, and big GOP donors, he has also split the loyalty of ruling corporate elites.
For the first time in decades, corporate plutocrats are deeply divided over the Republican presidential nominee. Directors and CEOs of major U.S. corporations that have investments in China, Mexico, or in the Muslim world dread seeing Trump become the face of the United States. As the nation’s top diplomat, he could do real damage to delicate business relationships abroad. As Commander-in-Chief he could fuck up the world.
But corporate media cannot help but continue to give Trump free airtime. The night of the Indiana primary MSNBC hosted dozens of anti-Trump commentators but still ran a graphic on the bottom of the screen advertising that Trump was going to appear the next morning on the Joe Scarborough show.
This market and ratings-driven media environment guarantees that the Trump dog and pony show will continue to generate ratings and profits, providing another revenue stream to media corporations in addition to the cash the campaigns and Super PACs are pouring in.
The “winners” are media moguls like Leslie Moonves, the CEO of CBS, who noted last February that the Trump candidacy “may not be good for America, but it’s damn good for CBS.” The “losers” are everybody else.
So many media corporations, pundits, news producers, consultants, party officials, and Super PAC managers are making so much money this kabuki dance will keep the dollars flowing until the whole shit-show crashes and burns in November.
Franklin Delano Roosevelt warned us: “Government by organized money is just as dangerous as government by organized mob.” For quite some time now we’ve had government “by organized money”; Trump has brought forth the organized mob.