The Election and Working Class Politics 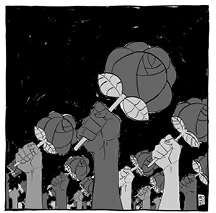 by Joseph M. Schwartz
The Need for a Class Politics
What motivation did Hillary Clinton’s campaign provide for working-class voters of all races to turn out? Her ads stressed her “competence, experience and expertise” and the deep character flaws of her opponent, including his horrific misogyny. No doubt misogyny played a role in Clinton’s defeat. But, Clinton failed to emphasize her platform’s call to raise the minimum wage to $15 per hour, create jobs through public investment in infrastructure and alternative energy, and oppose “free trade agreements.” She never fully embraced the platform imposed on her by the forces behind her social democratic rival, Bernie Sanders. Yet Sanders’s message did resonate with white working-class voters and millennials of all races. In addition, the symbolism of a woman running for president failed to win enough white working-class or college-educated women.
Many working-class-voters view the Democrats as the party of white, socially liberal, bicoastal elites who look down upon the non-college educated. Both Republican and neoliberal Democratic politicians have embraced a racial politics that attacks antipoverty programs as creating dependence, while supporting with varying degrees of ambivalence universal social welfare programs such as Social Security and Medicare.
Narrow Victory for Trump
We should not exaggerate the size of the Trump victory. Elections are often won on the margin. Clinton won the popular vote by at least 2 million votes (or over one percent out of over 137 million votes cast), and if we didn’t have the Electoral College system (created to give increased political weight to the slave states), she would be president of the U.S. The deciding votes were approximately 97,000 or just enough to fill a large stadium. Clinton lost Pennsylvania by 68,000 votes, Michigan by 11,000, and Wisconsin by 18,000. None of these states had gone Republican since 1988. But small margins can mask seismic shifts. Trump’s support from white, college-educated voters dropped 10% from Romney’s 2012 total, while his non-college-educated white vote rose 10% higher than Romney’s. Clinton’s projected final vote total of over 65 million is about two million below Obama’s popular vote total of 2012 and about five million below his 2008 total. Trump’s vote rose slightly above Romney’s total, with an important uptick in small town and rural America, particularly in the Rust Belt (more among irregular voters than Obama-Trump switchers). Clinton lost in part because she failed to energize the Democratic base, particularly among working-class African Americans and socially liberal white working-class voters, many of whom stayed home.
As of this writing in mid-November, we still need to see actual electoral data, but exit polls indicate that Clinton probably lost whites without a college education by 70-30; and this ten-point swing away from the 2012 Democratic total explains Trump’s margins in rural and small-town white America. Trump’s victory did not depend solely on the white working class, as a good chunk of non-college-educated white voters are relatively affluent small business owners or contractors.
Clinton won the votes of the one-third of the electorate making under $50,000 a year by about 12 points; Obama won that cohort by well over 20%. (Close to half of voters making $50,000 or less are voters of color.) If the Democrats are to make gains against the Republicans in the 2018 and crucial 2020 elections (which will determine reapportionment), they have to make decreasing social inequality the centerpiece of their political appeal.


The left and labor must redress the hole in the U.S. electorate caused by the class divide in voter participation. Only 35% of eligible voters who earn below the median family income vote in presidential elections, whereas over two-thirds of individuals earning above the median income do. Overall, only 50% of people eligible to vote participate in presidential elections (only 30% in non-presidential congressional year elections). Elites in both parties collude to prevent the less wealthy from voting via onerous registration requirements and by keeping Election Day on a weekday rather than on a weekend or national holiday. Republicans are more aggressive suppressors of voting by people of color.
Voter suppression definitely cost Clinton Wisconsin and most probably Michigan. In Wisconsin, more than 300,000 registered voters were dropped from the rolls for not having adequate forms of identification or for not having voted in recent elections. African American turnout in Milwaukee County and in Wayne County (Detroit) was down far more than the national 10% drop in African American turnout from 2012. And the closing of scores of early polling stations in North Carolina undoubtedly cost Clinton tens, perhaps hundreds, of thousands of African American votes. As it is, 13% of African American men cannot vote because of felony exclusion; 25% in Florida. Thus, the movement against voter suppression remains central to the struggle for equal rights.
Still, there was some good news on Election Day. The increasing participation of Latino voters means that Georgia, Arizona, and Texas will soon be competitive states. Voters in Maricopa County, Arizona, defeated the racist incumbent sheriff, Joe Arpaio, and progressive black district attorneys were elected in Cleveland and Chicago. Latinos, particularly union activists, are the leaders of progressive politics in California, Nevada, Arizona, and soon Texas. Voters in Arizona, Colorado, Maine, and Washington voted to raise their minimum wages, and Arizona and Colorado approved measures to require businesses to provide employees with paid sick leave. Thanks to the deep organizing of the Richmond Progressive Alliance, Richmond, California, passed significant rent-control initiatives. And California voters approved measures to extend the current income tax surcharge on wealthy residents to pay for public education and to repeal the 20-year ban on bilingual education.
How Can the Left Fight Back?
read more at http://www.dsausa.org/fighting_faux_populism_dl
Posted by Duane Campbell at 5:30:00 PM