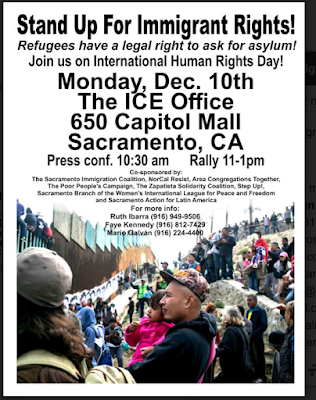 For the past several weeks and months, families have been fleeing Honduras and Central America, desperately trying to make a better life. From a mother carrying her baby in her arms to children choking on tear gas sprayed by border patrol agents, the consequences of a broken immigration system, militarism, and endemic poverty are clearer than ever.
While politicians use the suffering of these refugee families to stoke a fear of who is coming towards our border, we are brought closer together in common suffering and hope.
On December 9 and 10, The Poor People’s Campaign: A National Call for Moral Revival, Kairos Center and Repairers of the Breach will join the American Friends Service Committee in San Diego and hold an interfaith service, calling on faith leaders, poor people and all people of conscience to take action together. With December 10 being International Human Rights Day and the 70th anniversary of the Universal Declaration of Human Rights, we will demand the demilitarization of border communities and the absolute protection of migrants seeking refuge.
Sign our petition to stand with migrant families and demand Congress overhaul our immigration system and demilitarize the U.S.-Mexico border and interior to ensure all communities can thrive in this country.


The conditions that have forced these families to risk their lives and travel thousands of miles to the U.S.-Mexico border are deeply bound to the decades of U.S. military intervention and federal policies that have prioritized corporate profits over millions of people on both sides of the border wall.
Next week, we will join the American Friends Service Committee and many other organizations in standing with those families from Honduras and Central America. Sign our petition to demand your member of Congress take action now.
This is a fight for the very heart and soul of our democracy.
Forward together, not one step back,

The Poor People’s Campaign: A National Call for Moral Revival
Posted by Duane Campbell at 4:03:00 PM